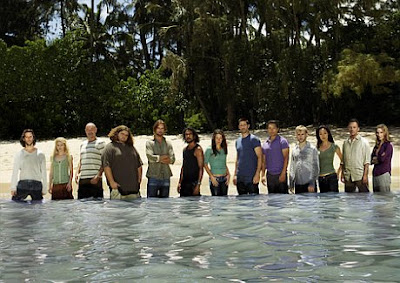 I have made my way through a couple of discs of Season 3 without a lot of comments to list here. As you may recall, the first part of the season involves Jack, Kate & Sawyer living as prisoners with the Others. We also get to see the results of the hatch explosion on the other side of the island (Locke saves Eko from the bear cave, Desmond wakes up naked in the jungle). Also, we are introduced to the most hated Losties ever, Nikki & Paolo. So I haven't had much to say so far. But here is where I'll start (and keep in mind that my comments are very SPOILERy):

1) I remember all the haters at this point in the series. I find that I pretty much enjoy every episode the first time I watch it. If it is a good episode, it holds up well the second time around. The best episode so far in Season 3 is the Desmond-centric "Flashes Before Your Eyes." I recall that this episode was really confusing for me the first time I watched it. I think a good deal has since been revealed about the course-correction/time travel that is explored in this episode. I have also had plenty of time to digest its meaning. As a result, I understood it a lot better, and while the big end reveal (that Charlie is going to die!) wasn't a surprise, I enjoyed this episode greatly on the second pass, because it made some more sense. And I love Desmond (see my previous posts where I go on and on regarding my love for him).

2) Nikki & Paolo. Yes, I hate them from the very first introduction. Annoying to start. What about them was so annoying? Well, they are the only characters that have been added that were supposed to have been with the survivors all along. We can accept other people added, as long as they add a new dimension of story (Ben & the Others, the tail-end survivors, Desmond).

3) Mikhail told Locke that "You I might have a fleeting memory of, but I must be confused because the John Locke I knew was..." and then old Danielle interrupted him. But I do think that was an important thing to catch. And one that I had forgotten. How does Mikhail know John from the past, and does this have anything to do with the theory that events on the island all have happened before and will all happen again (BSG anyone?).

4) Speaking of, I don't think we have seen the last of Mikhail. I have the feeling his unable to die like some of our other island friends.

5) What ever happened to the note that Claire & Charlie tied to the migrating bird? Will anything ever come of that? I suspect if that note gets discovered, the O6 stories will fall apart. But then again, it is 3 years later and no carrier pigeon has been found.

6) "You two arguing over who's your favorite other?" - a quote from Sawyer, when talking Jack & Juliet. Just classic Sawyer. I love his Sawyerisms, and have been able to appreciate them more watching the episodes so closely together. Have I mentioned that I just like him so much more this time around? I love redemption stories.

7) I had forgotten about the "camping trip" that some of the boys (Desmond, Charlie, Jin & Hurley) into the Jungle when they are looking for/discover Naomi. But I really loved it when Jin told ghost stories by the campfire. In Korean. With a flashlight. You have no idea what he is saying, but Hurley still jumps out of his skin when he lifts his arm stump and screams.

8) When Sawyer kills Locke's dad in the Black Rock, the scene is just absolutely heartbreaking. While there is so much relief to see Anthony Cooper "offed" finally (I mean, he is just the most awful person... Worse than Ben? I think maybe so.). But at this point, we know that James Ford just wants to be liked and to be the person that Kate deserves. So it is so hard to see him revert to his old ways, but you also know the deed kind of just has to be done. I remember thinking the first time around on this one that he wouldn't actually do it. I was horrified when he did.

9) Charlie's death stands to be the saddest death to date (through end of season 4) on LOST. I know that there are a lot of Charlie-haters, but he was one of my favorite Losties, and not only was I sad to see his character die (and those around him to suffer that grief) but I miss the comedic layer he brought to the show. I keep hoping somehow he is he is still alive (while I know that is not likely).

Actually, I have season one, but I've only managed to watch the first episode. Suddenly, I just lost interest. Perhaps because I was afraid that it would fall into some kind of a soap series. Yet, so far it was widely watched by people. Even now, I haven't been able to get myself excited enough to watch the series. Do you think generally the series is "that" good?

Lost is one of my favorite shows of all time. To be fair, I understand whey some people don't like it. The two biggest complaints seem to be:

1) It is hard to follow
and
2) It doesn't give answers to a lot of the questions it presents.

My response is
1) You have to enjoy the mythology of the show, and you can't skip episodes or you won't know what is going on.
and
2)You have to patient, because the answers come. In the meantime, enjoy the entertainment value of the show.

All that to say, give it a few episodes before you decide you don't like it. I find it hard to LOVE any show from just the pilot. But be open to some mystical things.

Maybe I'll have a look at season one first. It's not whether it's hard to follow or not. It's that tendency to degrade into crappy series (like Alias or X-Files) that I don't like.

Hi - Came across your journal during a "Desmond" search and enjoyed reading what you had to say about my favorite scotsman. :)
I wanted too, to invite you to a fantastic fan forum site for Henry Ian Cusick, the amazing actor who portrays Des. If you haven't already visited, please feel welcome to do so...we'd love to have you! Besides having some of the nicest fangirls you'll ever meet, there's anything and everything you'd want to know about Ian/Des. :)

I think the joy in watching LOST is experiencing how the characters are revealed and their journeys. If you're in it solely for the mysteries of the plot, you will be frustrated. I doubt it will jump the shark like Alias or X-Files as there is a set end date and the show is being written specifically to reach that goal.

I never hated Charlie either. I think Nikki and Paulo (like everyone else) were the only characters I despised. I loved the way the writers came up with to get rid of them!