Fox and iTunes sitting in a tree

The powerhouse that is American Idol is responsible for 6 of the top 10 songs on iTunes as of right this minute.

While it is obvious that winner Kris Allen's new "victory" song No Boundaries would be on top (or, is it obvious since it is a pretty horrible song), but Kris also has his amazing version of Heartless and Ain't No Sunshine on the list. Also, no surprise that Adam Lambert's Mad World is on there (the one song of his I considered downloading myself).

But then you have the song Permanent which David Cook performed on the finale (about his brother, which was quite an emotional performance). And while I love the show Glee, I would say the success of the show was certainly assisted by its Idol lead in. And I love that Don't Stop Beleivin is doing so great on there (it is such a fun version of the song, especially in the context of teh show).

I bet Fox is making a KILLING from iTunes right now. Ultimately, this blog post is just a chance for me to say how happy I am Kris Allen won and how much I like him. Good luck to both Kris & Adam in the future.

I think I will throw a few videos of the above songs below:

Last night I attended the Fox premiere of its new summer show Glee at Santa Monica High School. There was a nice turnout and I even got a t-shirt. 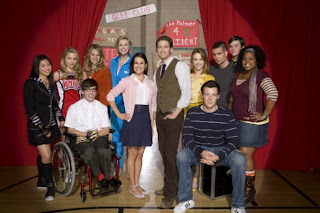 Before I tell you what I thought, I should preface this by saying I am very much a choir nerd and a music geek. I have always and will always be a choir girl who loves music, adores singing, and appreciates a well-performed and -arranged performance. That being said, I really hope this show can stick around. It is right up my alley. It fills a very empty niche. I wouldn't really call it a glee club (I think of my dad in men's glee club in college in the 60s) as much as a "show choir." But Glee works better as the title (and they can put the loser "L" in the title on the promos).

Here is a brief synopsis: Will is a high school Spanish teacher who feels the urge to takeover the pitiful glee club at his school. He holds auditions and finds only a few who are both willing and talented enough to join. These also happen to the be the social outcasts. Will decides to do what he an to draw in new members from the popular crowd, thus giving the glee club a new public perception. He has to do some manipulation but acquires a new member and the group is official. But there are many bumps along the way to a success at a competitive level.

The people who have gotten excited about this show constantly refer to the "Don't Stop Believing" commercial for it. The actual appearance of this song in the premiere episode was great. I couldn't stop dancing throughout the whole show, but this one just sucked me in (plus the viewers were kind of emotionally involved by then, too).

The singing was excellent and there is a fun array of characters representative of high school (or at least of high school on film). There is the uber-talented, socially-awkward and somewhat annoying Rachel, played by Lea Michelle (her voice is amazing, but I already knew that from Spring Awakening). Then they combined the geeky guy with glasses and the guy in the wheelchair to come up with Arty, played by Kevin McHale (who is NOT so nerdy or wheelchair-bound in real life -- he was adorable). You've got the jock-with-a-heart-turned-glee-club-member Finn, played by Corrie Monteith (who perfectly embodies the qualities of an athlete, a singer and a nice guy). And the soulful black girl with attitude Mercedes (Amber Riley, who coincidentally is an Idol castoff from years past). The gay boy more concerned with his designer duds than anything else, Kurt (played by Chris Colfer).

As for the adults, Will is the teacher who takes over the glee club. He is played by Matthew Morrison, who I think comes straight from Broadway. But he didn't sing in the first episode, so I look forward to hearing that. Jane Lynch as the cheer coach is absolutely hysterical. In fact, she was so funny in person, too. I officially love her now. Jesselyn Gilsig is appropriately annoying and frustrating as Will's wife.

The soundtrack when the cast isn't performing is still done with vocals and is really different and fun. And if rumors are true, they will release the music to iTunes directly after each episode. I better start saving up my money now because I will be purchasing new music every week!

Come on, just watch this trailer! And then watch on May 19!! 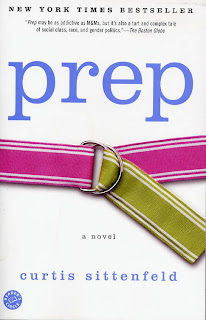 Curtis Sittenfeld had a pretty good year with the popular and critical acclaim of American Wife. I read it and haven't posted about it yet (but I will get to it eventually). In the meantime, I have now read her earlier book Prep, set in a New England boarding school. Sittenfeld certainly attacks different subject matter in these two books. Here is what I though of Prep.

The basic story is this: Lee Fiora is a Midwestern, lower middle-class girl who decides one day she wants to go to boarding school. She works to get scholarships and gets accepted to a prestigious school in the northwest called Ault. But when she arrives at Ault for her freshman year of high school, she finds that the glamorous boarding school life she imagined and reality are two very different things. She closes herself off, struggles to make friends, do well in school, attract the boy she likes, and generally fit in.

I read this book in just a few days and I think I was sucked into the whole "boarding school" concept immediately. Reading it, I thought back to my college days because I went to a small private college with many similarities to Ault. It was easy to imagine and Sittenfeld writes very well. It isn't over-contemplative but is also not just all conversation without any thoughts.

The bad part was that I just wasn't feeling Lee. I was frustrated with her and I felt like she consistently sabotaged her own happiness and comfort. While I am sure those people exist, I couldn't relate very well to that part of her (I could, however, relate to her feeling like the outsider and not being the "popular" girl). Also, there wasn't a whole lot going on plot-wise. It was written out in sections, divided by school term (fall, winter, spring), and, if I hadn't been told that was how the time was advancing, I would never have realized it covered a full four years of someone's life.

I think American Wife was a better book, and probably just a better all around read. But Prep was a fun few hundred pages and not too shabby for Sittenfeld's first novel.
Posted by Linz McC at 6:49 PM 2 comments: