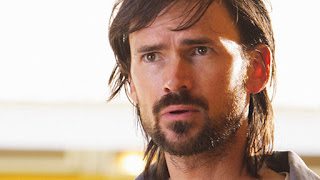 I have not blogged about Lost in quite a while, even though my brain is all atwitter over the recent happenings. This season has been thought-provoking at the least, but I will say amazing (even though I think this season has split the fans).

I have been waiting for this particular episode. Specifically, for one conversation. For Daniel's conversation about "variables." I have been suspecting that, no matter how many time the creators have reminded us that "what happened happened," we would find out differently. If you read message boards at all, people are adamant about this point. Don't get me wrong, I think it is generally true for our Losties that what happened did in fact happen. But I also think Daniel has realized there is anomaly. First of all, Desmond pushing that button changed everything. Daniel was able to go see him in the hatch and send him to his mother. Now, granted, one would argue that he did that all along... But, if I trust anyone on this show to be smart enough to realize there are variables along with the constants, it would be resident genius Daniel.

Oh, Daniel. RIP, my friend. I have really liked him from pretty early on. His character was endearingly crazy. And seeing his story fill in tonight was great, especially the confirmation of the long-suspected truth that Widmore is, in fact, Daniel's father. I have been avoiding spoilers on Lost like the Swine Flu, so perhaps it was a known fact that someone was going to die, but I didn't know (for once!) and was surprised and so sad to see Daniel go. But in the end I think his death was so revealing about Eloise Hawking and her "sacrifice" that it gave his death purpose.

Ellie/Elloise. So she made the ultimate sacrifice of her son. Knowing she would kill him. Could she have told him "I am going to kill you" and prevented it? That is unknown but Hawking has said over and over that things can't be changed, so maybe she believed that and didn't have a choice but to sacrifice him. You would think she could have been a better mother to him in the meantime!

My other thought on this, while somewhat fleeting, is this. Hawking has throughout the series been reinforcing the "can't change the future" aspect, but why keep beating a dead horse? Maybe she isn't quite so sure herself? Why couldn't she try not to kill Daniel by warning him? Maybe because she was OK with him dying. I mean it is pretty clearly a sad means to an end. Does this advance her own agenda? I guess I can't tell what her agenda is. She isn't working for Widmore and not for Ben. So is she working for a possible mysterious third party? Hmmm....

Desmond. Thank goodness Desmond is alive. I just couldn't take it if he weren't...

Myles & Chang. How funny was Myles face when Daniel told Chang that Myles was his son. And of anyone in the DI at that point in time, Chang would be the one with the capacity to believe it. So he says, "Is this true?" instead of a "yeah, right." And Myles denies it. Sad. There was his chance to really reunite with his dad. Meanwhile, back at the Dharma camp. Jim is contemplating how to deal with the prisoner he has captured and ends up bringing all of the non-Dharma gang in on the decision. I really enjoy Sawyer as a leader here. It just struck me as fitting that they were all sitting in a circle in his house discussing the options, and that he was in charge. Of course, Juliet kind of trumped his decision with letting Daniel, Kate & Jack head out to the hostiles, but Jim didn't seem to mind too much. They are still a sweet team. 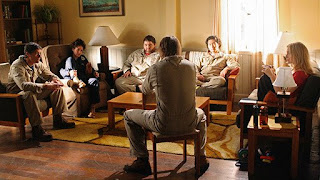 And they split. Everyone makes a choice on who goes where, and, look, only Jack & Kate leave. Hurley doesn't go. Jin doesn't go. And Myles makes the very obvious choice to stay behind. Should be interesting to see if they reunite back on the beach like they planned, now that ol' Danny bit the dust (*sniff*). I am worried that our core Losties are about to become enemies or something and I would hate to see that.

Going back. We have to go back, Kate. OK, this isn't what Jack meant when he said those words but they take on new meaning. Go back to BEFORE the crash and land successfully in Los Angeles. But wait, that means nothing that has happened happened. That is tragic and sad, even though we lost many along the way. I just can't see it that way.
Posted by Linz McC at 8:35 AM No comments:

Upcoming movies I want to see

I've been off the grid for a bit and this poor blog has taken the worst of it. So I am working to get back to posting. And since I have lots of upcoming movies on the brain, I thought I would list a few I am really looking forward to.

1) Harry Potter and the Half-Blood Prince

I've been waiting for the release of this one since I left the theater after watching Order of the Phoenix. The latest trailer looks UNBELIEVABLE!

I really enjoyed the X-Men movies, especially parts one and two. I also really like Hugh Jackman. But I was really excited about some of the other casting on this one, too. Especially Taylor Kitsch as Gambit. I think he is about to blow up huge.

Christian Bale & Johnny Depp. Do I need to say anything more? But I will. I also love the subject matter (John Dillinger and bank robberies and tommy guns...) and time period.

4) Terminator Salvation
Watch the trailer here. More Christian Bale. And I love the Terminator franchise. Looking forward to seeing where they go with this one.

5) Star Trek
Watch the trailer here. I don't even watch Star Trek and have never been interested in it one iota. But JJ Abrams has done what he set out to do, and that is to appeal to a whole new group of potential fans with his new interpretation.

How cute does this one look? I really like Joseph Gordon-Levitt and Zooey Deschanel.

7) The Hangover
Watch the trailer here. First, the reason this attracted me was Will Tippin, I mean Bradley Cooper. And, as usual, he is playing kind of the sleazy guy, but I am glad to see he is playing a main character. But this trailer actually really cracks me up. The tooth, the tiger, the baby.

8) Transformers: Revenge of the Fallen
Watch the trailer here. I have been sucked into the Shia LeBeouf hype and really like him. Plus, I enjoyed the first film, so I'll give this one a chance.

When I first heard of this, before the trailer, I thought it would be much goofier. Instead it is just a quirky, sweet-looking little thing. I can't wait to see this one. Looks entertaining.

10) Land of the Lost
Watch the trailer here. I have seen a fair bit of this because Sean was working on it and the parts I have seen are really funny. Will Ferrel almost always cracks me up. Plus, I must support my man's work!

Movies I am maybe excited to see (can't decide):
1 & 2) I want to be able to say I am looking forward to the release of The Time Traveler's Wife and My Sister's Keeper, two of my favorite books of all time, but I am concerned about the film adaptation in both cases. Therefore, I am hesitant to put any hope into them. I'm sure I will see them both anyway.


3) The Soloist - I adore Robert Downey, Jr. and really love Joe Wright, who is directing. I just am not sure this movie actually appeals to me. I don't love Jamie Foxx. Maybe I'll just rent it unless it gets rave reviews or something.


And while I really like to support my husband and his work (I did see Alvin and the Chipmunks in the theater, and plan to see Land of the Lost), I am not sure I'll be seeing They Came From Upstairs. I'm sure we'll see it eventually but I am just not sure I can sit through it. I am not the target audience here.


Well, my list of movies to see this summer is huge! There are a few others that caught my eye but didn't quite make the list. I better start saving money now or plan on going to the 11 am shows for a discount...
Posted by Linz McC at 8:44 PM 4 comments: