The End of Lost 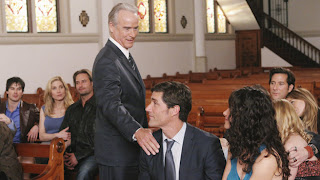 I didn't even try to write about Lost this season. It was not only overwhelming, but kind of exhausting and I didn't always get my head wrapped around it in a timely manner.  However, I do think that the series finale, appropriately entitled "The End" deserves a post of its own. 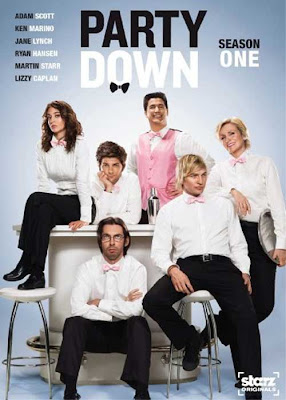 I had various reasons for wanting to watch this show. Originally, my main reason was because it is co-created by Veronica Mars creator Rob Thomas, and Paul Rudd (who I just love anyway). But the cast is excellent. And it's just funny.

You may not have heard of this show as it appears on the cable channel Starz, but it was available on my Netflix Instant Watch. The plot centers around a group of cater-waiters for a company called Party Down. It's probably safe to say that you would not want this group catering your parties...

The cast (I'm going to relate as many of the cast as I can back to Veronica Mars):

Ken Marino as Ron - AKA Vinnie Van Lowe
I'd call him the lovable loser but he isn't really all that lovable. He thinks he is very smooth and is easily dooped. You more just feels sorry for him.

Adam Scott as Henry - AKA Mr. Rooks
I know Adam Scott from his episode of Veronica Mars and from a few episode stint on Six Feet Under. He was also the huge jerk of a brother on Step-Brothers. But his character Henry is the most "normal" of the group. He is an almost-actor that has resorted to cater-waitering for an income. He is very likable and relate-able. And he is pretty cute to boot.

Lizzy Caplan as Casey
I know Lizzy Caplan from Mean Girls, The Class, and True Blood. Casey and Henry hook up during a job and then there is that awkwardness that follows, but it's rather endearing. I liked Casey for MOST of the season. She might have ticked me off at the end...

Ryan Hansen as Kyle - AKA Dick Casablancas
Kyle is adorable and obnoxious. Kyle isn't as big of a jerk as Dick in VM. He is the really cool guy that likes to party and gets all the ladies. And he is funny.

Jane Lynch as Constance
Does anything need to be said about the ever-brilliant Jane Lynch? Her line delivery is always spot on and her character is a bit ridiculous, which makes her even funnier. Unfortunately for Party Down, Jane left the show to be a part of Glee. Megan Mullaly moved in to the empty space.

Martin Starr as Roman
I loved Martin Starr as über geek Bill in Freaks & Geeks and am always glad to see him in other things. And guess what: he is a big nerd in this one, too (well, that's just what he plays, right?).

I think this cast and how they work together is what makes the show so funny. ALL of the story takes place during catering jobs. There is not outside interaction. Various Veronica Mars alum show up during various episodes (you can definitely look forward to seeing Kristen Bell and Jason Dohring).

Final word: Prepare yourself for crass humor and you are going to love this show. Too bad it doesn't get more press because it is on Starz channel...