Book: The Other Boleyn Girl 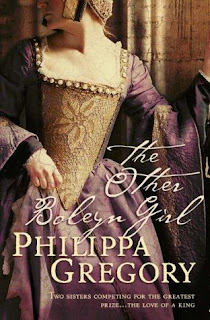 I just finished reading Philippa Gregory's The Other Boleyn Girl. Before it was a (from what I have heard, bad) movie starring Scarlett Johansson, Natalie Portman, and Eric Bana, it was a novel. A very long novel. Six hundred some odd pages. I made my way through it in about a week. It was an enthralling story, and while we know the general story of Anne Boleyn and King Henry VIII, it is always fun to get a little fiction on the side to spice things up. Reading this book made me want to watch Showtime's The Tudors (well, that and Jonathan Rhys Meyers). I am intrigued by the time period and by the seemingly treacherous goings-on of Henry's court.

The reader feels a certain amount of anger toward the Boleyn family, as they are willing to sacrifice any member of the family in order to advance themselves in England and to have power. So much so that they send their married 13 year old (Mary, the protagonist) daughter to the king's bed. Anne is portrayed a despicable, power-hungry, selfish jerk. Her every single action is for self-advancement. While their semi-likable brother George is not so bad, he often gets caught up in Anne's plans and the reader is angry with him for being so dumb. However, while Mary spends a good while being annoying and making dumb decisions, she eventually finds herself capable of making her own decisions, and this book makes for a good love story. If you know your English history, the ending is no surprise, but it is interesting to watch everything unfold (or to watch how Ms. Gregory imagines it, anyway).

The only thing I found frustrating was that so much of the story seemed repetitive, but that was because it had to be. A very long portion of the book focuses on whether the king's first marriage will be annulled, and it is very "will they/won't they" but since I knew they would, I got tired of it. This also happens with pregnancies and such.

The same can not be said for the film based on this book. I only made it about 30 minutes through it, so I suppose it is really not very fair for me to judge the movie. But I was so disappointed that so much was changed from the book that it turned me off. And I had heard it was not good, so that turned me off, too. I would rather keep the book in my mind since I enjoyed it.
Posted by Linz McC at 10:00 AM

I am fascinated with this period of history and have read books on Elizabeth I, the wives of Henry the VIII, Catherine of Aragon, etc. I thought the book was intriguing--like you it was a quick read for me as well--if not completely accurate.

The biggest failure of the movie was that while the book was about the OTHER Boleyn girl, the movie ended up being about the Boleyn girl we already know about. And not only that, but they never kept any kind of point of view--switching from Henry to Anne to Anne and Mary's venal relatives and spending very little time on Mary.

In the book, Mary is portrayed as some kind of proto-feminist but in the movie she's a sweet little sap. Blech!

The costumes were great though...

Unfortunately (or not), I did not make it far enough into the book to even realize those issues. I was turned off right away when they tried to base Anne's choices on something besides being completely 100% self-driven. In the first few minutes of the movie, they make it seem like she gets her motivation from being spurned by Henry (in favor of Mary) which isn't really how it went in the book. OK I have just babbled... But it was annoying and a turnoff, and therefore, I don't plan to finish it.

You're not missing much by not watching the movie. If you can get a hold of it, the Masterpiece Theatre series The Six Wives of Henry VIII (based on the Antonia Fraser book) is far better.