I loved this episode of Lost. If you have read my Seasons 1-4 recaps, you'll know that I was originally a fan of Jack, but the re-watch of the series won me over to Sawyer. Now I just officially love him. This episode certainly had a different feel to it than usual. Partly because of the "three years earlier"/"three years later" way of story-telling, but also because the content seemed so different. The audience is watching this episode knowing that Kate, Jack & Hurley will be found by a jumpsuit-wearing Jin. For me, it was quite devastating to watch as these characters adjusted to a life with the Dharma Initiative (one that seems pretty happy, actually), only to be mucked up by the return of those we have moved beyond (except for Jin, who I am hoping gets to reunite with Sun soon).

Here is why I am confused. Locke turned that wheel to save the rest of the time-flashing gang on the island. I understand why he did that. But we also know that Locke, along with the Oceanic Six, would have to return. Richard told Locke that, didn't he? "You're going to have to die, John." But those remaining after Locked turned the wheel seemed alright. Was it just a trick? Did someone need to turn the wheel so they had John do it? Are the O6 returning to the island just to serve as pawns in the upcoming "war" that Widmore warned about?

I have been waiting all season for the Kate/Sawyer reunion. Like, knowing how much he loves her. And I never in a million years imagined that three years would have gone by on the island. I thought that, while three years passed off-island, it would have been a much shorter amount of time. I didn't expect things to progress like they did:

1) The most obvious: Sawyer and Juliet have a thing. Like an "I love you" thing. And I actually bought it. It was believable and it was sweet. It made sense as soon as they started jumping through time because they were constantly leaning on each other for support, and fessing up to weird happenings and sad feelings.

2) Jin is completely fluent in English. I have heard Daniel Dae Kim speak in interviews and he has zero Korean accent. So he is still having to put on, but I love that he can finally speak English and not have to do that "I don't understand" shtick he has done for 4 seasons. On a sidenote: Daniel Dae Kim will be playing the King of Siam in The King and I at London's West End. I wonder what kind of singer he is!

3) This gang is very established in the Dharma Initiative. Sawyer aka LaFleur is head of security. They all have their very own jumpsuits. Juliet is a mechanic. What is Myles doing? Don't know, but he came along for the ride, and it seems they all are quite good friends. As in happy.

4) Guess who is new to the show! Herc (Kevin Rankin) from Friday Night Lights. Now we can wonder if the island "cured" him of his need for a wheelchair. Also new to the show, Reiko Aylesworth, or Michelle from 24. I think I stopped being interested in 24 after they killed her off.

Let's mention a couple of other things here. I love how the confused and unknowing Losties are now the know-it-alls. When Sawyer went out and talked to Richard about Jughead and crazy Locke, I was so happy that, finally, our guys knew something those guys didn't.

Also, other interesting things occurred this episode, such as the statue (Whoa! How far back was that?) and the birth of Amy's baby (Yea, a baby was actually born on the island!) but I am waiting to see where these things go (if they go anywhere) before I write about them. Mainly because I don't have lots to say about them right now, except "hmmmm....."

Does it seem strange to anyone else that Sawyer is still having Jin check every day for their people? Wouldn't you have given up by now, especially if you were as happy with life as they seem to be? Maybe Sawyer's proclamation that three years is long enough to get over someone was more just him trying to convince himself.

If I have read this correctly, and based on the time period we suspect this gang is in, where is young Ben? At first, I thought he might not have arrived, but if he comes much later, I would have a hard time believing Michael Emerson is young enough for the part.

Widmore led the Others aka "my people" peacefully for 30 years (I did hear mention of the Dharma/Others truce) until Ben screwed that up. So is Widmore currently leading the Others right now? It makes sense if this is the mid-70s, that we are 20 years into the Widmore Era. That leaves 10 more before Ben kicks him out, and probably till the Purge (or maybe a little longer).

The writers threw me for a big loop hooking Juliet and Sawyer up that way. How is Kate's return going to change this? How big of a wrench will be tossed in? As Sean said, "Poor Juliet. She is always tossed aside for Kate." Kate, who we are growing to dislike more and more...

Here are some review links:
Lost 5.8: LaFleur by Emily at Eclaire Fare
LeFleur Recap and Analysis by Erika
Things I Noticed: LaFleur by Vozzek69
Posted by Linz McC at 1:48 AM 5 comments:

The End is Here - Pushing Daisies 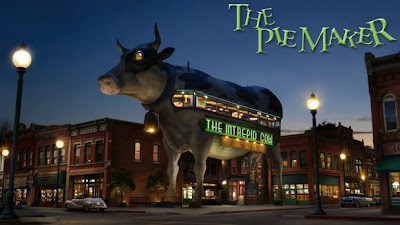 Yes, I am aware that it has been quite some time since we learned that ABC wouldn't be renewing Pushing Daisies. I have come to terms with it over the last couple of months. And I was anxiously awaiting the final 3 episodes of the series, hoping for some closure. Of course, then we discover that ABC won't even be "burning off" the last three episodes on network TV, and we would have to wait for the DVD to see the final eps.

Indian television, however, doesn't have any reservations about playing the series through to its (all-too-soon) end, and I discovered that they were playing these final episodes over the last few weeks. While being sad it is over, I was also excited as we had been told that the series finale, while not originally intended to be a finale, would give us some closure.

Unfortunately, while the story progresses in a satisfactory way, addressing so many of the plot points that are still up in the air, it was clear that the writers tied up some loose ends just to say they were tied up. And things are rushed. The regular progression was quite enjoyable (and it was headed in a kind of new direction, had it not been canceled). I was glad to see it, but only reminded it was canceled way too early.

I believe this is the episode they were filming the day I saw Lee Pace (!) and David Arquette at the WB lot. If I remember correctly, it was on their very last day of filming. The good news is that I don't think a single one of these actors will be looking for work for long.
Posted by Linz McC at 11:33 PM 2 comments: