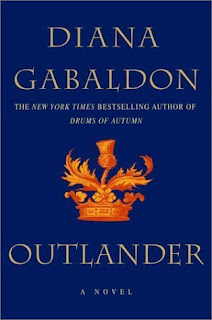 A couple of months ago, I was getting a mani/pedi back in Texas and my nail lady (who is also a close family friend) insisted I take her copy of Outlander back to California with me to read. I constantly have a stack of books to read and it was kind of low on the list. But I decided I needed to read it so that I could give back to her on my next trip back to see my fam.

The basic story is that Claire is an English WWII nurse reunited post-war with her husband after six years apart. They visit Scotland on a trip together, where, after visiting an odd circle of stones connected with the Druids, she finds herself in the 18th century Scottish highlands. I don't want to give too much away, but some interesting things take place.

It sounds pretty cheesy, I know. But the writing really is not very cheesy. While this could have easily gone the "romance novel" route, it didn't. It stayed steeped in the history of the time and I was sucked right in. Granted, the romance aspect is there, and is important to the story, but I never felt at any point that if I looked on the front cover of the book, I might find a Fabio-look-a-like staring back at me. At first, I didn't realize it, but the book was almost 900 pages long. So it too me over a week to finish, even though I got sucked in rather quickly.

As my nail lady said, "It has something for everyone. It has action. It has history. It has romance. It has time-travel."

The good news/bad news is that there are like 6 books in this series (so far, and one more about to be released) and I am sucked in. So I am already about 1/3/ of the way through the second book Dragonfly in Amber.

Anyone else read this one?
Posted by Linz McC at 9:34 PM 2 comments: 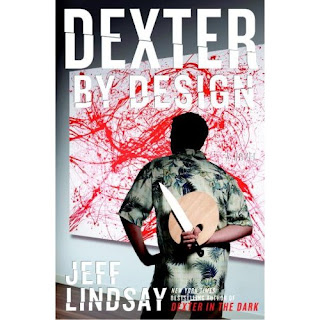 When I was in London last spring, I picked up Dexter by Design by Jeff Lindsay. The book releases in the US next month, so I felt all kinds of special for reading it before the rest of the country.

Dexter by Design is the fourth book in the Dexter series by Lindsay. It picks up during Dexter & Rita's honeymoon in Paris. I'll be honest. I didn't love Dexter inthe Dark (the third book in the series). But thank goodness, the Dark Passenger has broken his silence and Dex is anxious to make another kill. The opportunity presents itself quickly after his sister Deb is stabbed by a suspect. So Dexter takes hasty action and deals with the problem. Only to discover he killed the wrong guy. An innocent guy.

The story then follows Dexter as he works to deal with a certain amount of guilt (although, believing he is incapable of guilt, he can't quite admit that), as well as finding the real killer, hoping that Deb wakes from her stab-induced coma, being found out, and being a newlywed. He has lots of balls in the air.

On top of all that, if you ever hoped to envision Dexter as a green leisure suit-wearing missionary, you will get your wish.

I really enjoyed this installment in the series and I think, after Darkly Dreaming Dexter (book 1) this is my favorite. Emily and I have discussed certain plot holes that we have decided to ignore as the book itself is quite enjoyable. If you have read the previous books, check this one out, too!

Pre-order the book here!
Posted by Linz McC at 10:24 AM No comments:

Ever since Adam Lambert made the top 20 on American Idol and started showing off his range, I was wondering when he would sing a Muse song. English band Muse is one of my all-time favorites and singer Matthew Bellamy has an uncharacteristically high voice and amazing control. They put on a spectacular concert and I have posted about them on here before. So with Adam's also-amazing range and control, why didn't he sing any of their music on Idol? Well, they are still trying to get control of mainstream American music (although I know tons of fans, even pre-dating their appearance on the Twilight soundtrack). So he probably didn't choose it because it isn't as widely known.

So here is the video of Adam performing Starlight.

Here's the thing. I don't like it. For one, Adam's voice sounds off, like he is tired or sick. Second, Bellamy and Lambert are both loud-mouthed energetic voices and this acoustic version of this song just doesn't bring any of that.

Would have loved to see him perform Supermassive Black Hole or Exo-politics in full-on rock mode. Here's hoping we'll see something like that from him eventually.

To be fair, he did kind of hijack their version of Feeling Good, my fave version of that song.