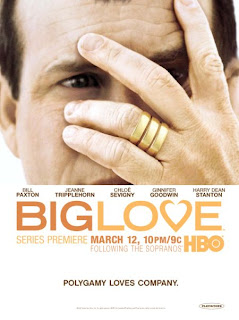 My sister has been telling me to watch Big Love for ages.  And I finally added it to my Netflix queue after my husband expressed just a semblance of interest.  And we have been sucked in.  I am currently awaiting disc one of season two (today!), so while I wait, here is what I thought of the first season.

I love the idea of representing a modern times, off-the-compound polygamist family.  And the show does a great job of making the people in this family (er... most of them) seem really normal. And likable.  You kind of look at them and start making excuses for their lifestyle and rooting them on. In fact, I have now said to my husband: How is what they are doing illegal? He isn't legally married to any of the wives except Barb. There is no law against sleeping around, having illegitimate kids, paying someone's mortgage (who isn't your spouse).  We decided what they are doing is most likely not illegal but just really looked down upon.

Here are my thoughts on a few of the main characters.

1) Bill Henrickson (Bill Paxton) - He's a bit of a doofus but he's a good businessman and managed to snag not one, not two, but THREE hot wives.  I would be doing fine if I never had to see his unmentionable parts or tighty-whities again, though.

2) Barb (Jeanne Tripplehorn) - Barb married Bill before they decided to live the "principle" of polygamy.  In fact, he wasn't moved to leave the LDS church and revert to his roots until SPOILER ALERT Barb got sick with cancer and almost died.  And I guess she agreed.  Barb is the first wife, making her in charge, pretty much, of the other two.  She's my favorite wife of the three.  She is the most obvious as for why Bill ended up with her and like her kids.

3) Nikki (Chloe Sevigny) - Nikki is the long skirt-wearing, braided wife from the compound.  And really she is just obnoxious and manipulative. They ahven't gotten into it much but it has been thrown around that Bill married her because of a business deal with her father Roman, the One True Prophet.  She just sucks but I loved in teh final episode when, for Barb's sake, she SPOILER ALERT put on a normal dress and wore her hair down and makeup. She looked pretty.

4) Margene (Gennifer Goodwin) - Margene is the latest addition to the family and is 23 years old. Needless to say, she is immature and has lots of growing to do. She is the most easily sucked into the outside world, but adorable at the same time. I like her but I don't see it going good places with the way Ben (teenage son of Bill & first wife Barb) checks her out.

This part of this post is SPOILERific so don't read it if you don't want to know.  I'll put it in italics!

For much of the season, Roman (father-in-law to Bill via Nikki) has been manipulating Bill and forcing him to hand over profits from his business.  Bill finally got fed up, got sneaky, and ended up on the elder board so he would find out all of Roman's secrets.  In addition, Bill's sister-in-law sort of poisoned Roman's son Albie (I hate his guts!) and to get back at Bill, exposed their entire family in public as polygamists, something they have managed to hide for 6 years.  End of season 1.

Hopes for Season 2:  They take Roman DOWN. He sucks! More story with Tina Majorino, who plays the friend of Bill & Barb's daughter Sarah (Amanda Seyfried)

I was just telling Emily yesterday why I haven't posted again about this season of Lost.  This is such a smart show.  So smart that, at times, it's over my head.  And I am OK with that but me babbling on about something that makes no sense to me wouldn't make much sense.  But I do have a few things to say about The Lighthouse and then I will direct you elsewhere to other people who "get" this better than I do.

1) Hurley. I love him in this episode. OK, I love him in general, but this episode reminds me of the change in Hurley.  He fully accepts that dead people talk to him and realizes he isn't crazy.  He tells other people straight up that he is talking dead Jacob, knowing that with the wackiness that happens on the island, it isn't as weird as he originally thought. Plus, he's just funny. That was a great scene where he told Dogen that he is a candidate and he can do what he wants.

2) Jack. He's a dad. And he kinda sucks just like his own dad does.  But, in my opinion, not nearly to the same extent.  He's an absentee father but not a total jerk that tells his son he sucks.  In fact, jack realizes in this episode that he does NOT have to be his father.  This season, Jack is reclaiming the part of my heart he held for a few seasons before we got so annoying. Matthew Fox's acting was excellent and I find his candid admission to Hurley of why he came back to be quite touching. And telling.

3) Claire.  Well, she ain't dead and she's after the people who took her baby.  And darnit if she isn't going to chop them to bits with a hatchet when she finds them. Look out Kate.  I thought for a minute she woudn't recognize Jin, but, alas, she seemed like she was bordering on crazy without being so.  Until the reveal of the "squirrel baby" in the crib.  And then we met her BFF, the man formerly known as Locke.  Uh oh. This doesn't bode well for her long term...

I won't get into the lighthouse. I need to let it sink in a little more. But, look, those numbers are assigned to the same name, and as Vozz points out, Kate IS on the wheel in the lighthouse.

What I am looking forward to/hoping for: the Jin/Sun reunion (I am currently thinking that Jin is the Kwon listed in the Cave of Names and that is why Sun didn't go back in time; just a thought), Claire somehow miraculously regaining her sanity (weirder stuff happens on this island), the proverbial s#$% to hit the fan with Sayid, and MOST importantly, discovering how Sawyer and Non-Locke got out of that cave after Sawyer broke the ladder!

Where are our Losties being guided? At least the ones that are "candidates?" I can't wait to find out.

Now go read these guys:
Vozzek's Things I Noticed (and his post on The Substitute)
Pink Ray Gun
Televisionary
Posted by Linz McC at 5:15 PM No comments:

I read Shiver by Maggie Stiefvater a few months ago and am anxiously awaiting the second book in the series, Linger.

In Maggie Stiefvater's Shiver, Grace and Sam found each other.  Now, in Linger, they must fight to be together. For Grace, this means defying her parents and keeping a very dangerous secret about her own well-being. For Sam, this means grappling with his werewolf past . . . and figuring out a way to survive into the future. Add into the mix a new wolf named Cole, whose own past has the potential to destroy the whole pack.  And Isabelle, who already lost her brother to the wolves . . . and is nonetheless drawn to Cole.

At turns harrowing and euphoric, Linger is a spellbinding love story that explores both sides of love -- the light and the dark, the warm and the cold -- in a way you will never forget.

Enter to win an advanced review copies of LINGER, Sisters Red, The Dead-Tossed Waves, and The Replacement on Maggie's blog.

I feel like I am waiting on SO many books to come out in the next year or so. Mainly books that continue certain series I am reading. Are you waiting on any books?
Posted by Linz McC at 12:54 PM 1 comment:

"You have no idea what's coming."

I haven't said it lately, but I think Michael Emerson's portrayal of Ben Linus on Lost is PURE brilliance. And while I am loving some of the other actors right now (namely Terry O'Quinn and Josh Holloway), I thienk Emerson is the best actor on the show. I screamed out loud when he FINALLY won the Emmy award for Lost. It was so SO deserved. I would really like to catch him on stage to see him live.

Michael Emerson appeared on Jimmy Kimmel last night and reminded us that he IS not actually an evil mastermind in real life, but just plays one on TV.

Photos: Neil Patrick Harris is "Out"

This set of photos and article came out ages ago, but I just came across them while perusing the new photos of (a very dirty-looking) Ewan McGregor at Out.com, which are also worth a look.  But if you know me at all, you know my love for musicals, Kristin Chenoweth and Neil Patrick Harris (not all at  once, but if Cheno and NPH were to pair up for a duet I might combust!).  So when I happened across these photos of Neil, aka Barney Stinson, again, I thought they definitely deserved to be posted on my humble little blog.  Here you go! 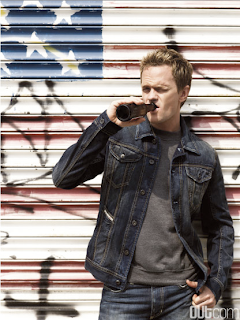 So it was finally announced that the third and final book in The Hunger Games series will be appropriately entitled Mockingjay. I am anxiously awaiting the release of this book as the series is a new favorite of mine. I keep recommending it to everyone I know who reads. So go read it! 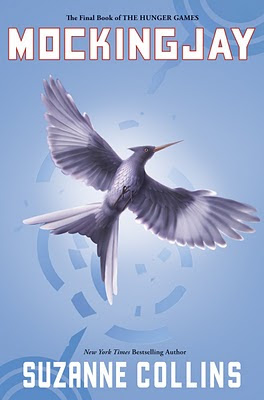 The first two books in the series by Suzanne Collins are The Hunger Games and Catching Fire. Mockingjay will be released on August 24, 2010 via Scholastic Press. 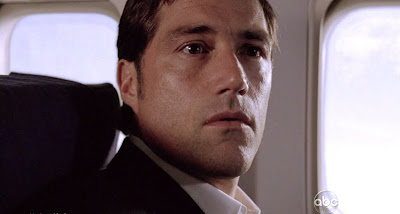 I'll be honest. I was a little irritated at the Lost episodes last night. Not that they weren't entertaining, and it was SO great to see our Losties again on screen in some new episodes. And I have watched this show religiously for five previous seasons, so I KNOW not to expect answers. I know that.  But for some reason, maybe since it is the beginning of the final season, I was really wanting just one or two little ones.