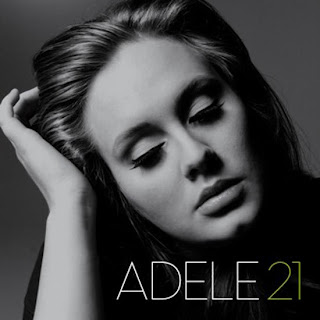 I first heard Adele a couple of years ago on So You Think You Can Dance.  Katee and Joshua danced this gorgeous number to "Hometown Glory." [Side note: I just got really excited about SYTYCD which starts in a few weeks!]

I downloaded that song and listened to it on repeat for ages. Then I downloaded Adele's version of "To Make You Feel My Love." Also beautiful.
When Kenzie told me I MUST get the new Adele album called 21 (named thus because she was 21 when she wrote it), I got my hands on it. Most albums require multiple listens before I can declare them good or bad. I got about three songs in on this one and was hooked. I couldn't believe how good it was from the get-go.

I can't believe Adele is so young. Her song-writing and singing skills are way above par. It's hard not to be impressed by her skillz (yes with a "z"). She is quite a hoot, too, if you ever see her in interviews.

A couple of song samples from 21! 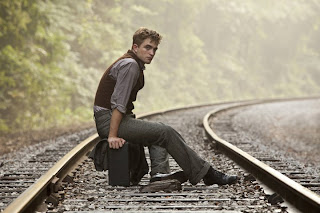 Well, if you know of my Robert Pattinson love, it wouldn't surprise you that I've managed to see my first movie since before the girls were born: Water for Elephants. As I have told Sean countless times, I enjoyed the book and was very intrigued when I found out that a film version would be made. Rob is just a nice pretty cherry on the top.

First off, you can read my review of the book here. 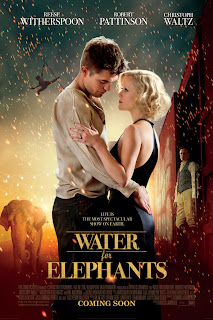 I had already heard good and bad things about the film adaptation before I made it to the theater. But I decided to make up my own mind.

The good:
The film sheds light on an interesting time period and setting (old-timey circuses and carnivals are so intriguing to me!). Christoph Waltz plays a bad guy with almost no heart perfectly, and helps the viewer to understand where he's coming from (even though he is still unforgivable).  Tai the elephant plays Rosie wonderfully. You can tell she is just so smart and it is sad because there is some animal abuse that is portrayed in the film and it's just terribly sad to watch. Robert Pattinson looks pretty: tan, sweaty, period clothing (no sparkles, no white makeup, no bouffant, no red lipstick, no colored contacts), and it suits him beautifully. He looked quite handsome. 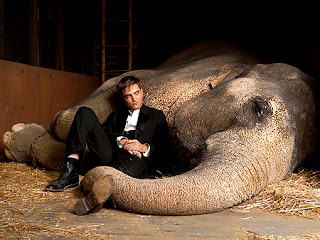 The bad:
I didn't really think Reese Witherspoon was going to be a great fit for the part of Marlena, and while she acted it perfectly well, my preconceptions of her as the girl-next-door interfered with my ability to see her for the character. And she didn't have great chemistry with Pattinson. It also doesn't help that she is 10 years older than him in real life, although she doesn't look it at all. 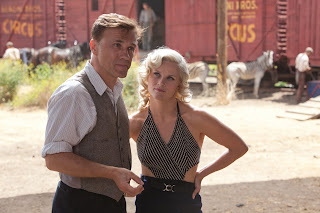 My recommendation:
See it, but if you like to read the book before you see a movie, take the time to do that first. But then, see it. It's sad, it's romantic. There's funny. There's action-y parts. Take your husbands because he'll just be glad you aren't dragging him to Twilight!
Posted by Linz McC at 8:45 PM No comments:

Now that Jessie Eisenberg is a household name, one of his older films is getting released in theaters, even though I'd seen it on my Netflix Instant Watch for ages. It's a 2010 film, so by ages, I mean several months. Anyway, I decided to give it a shot. Here's my thoughts? 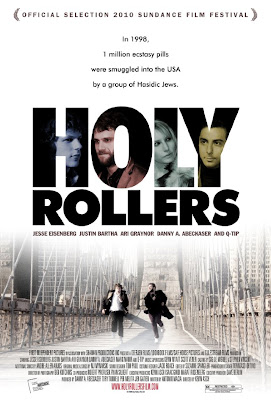 Holy Rollers is about an Orthodox Jew named Sam who gets caught up in an international drug ring. In the beginning, he unknowingly takes on a job as drug mule, thinking it was innocent. He is trying to make an extra buck to be "worthy" of the girl he wants to marry. Once he find out the trips to other countries aren't as legal as he thought, he sticks around for the money. Needless to say, he gets caught up in the world of drugs and partying and pulls away from his family and religion. 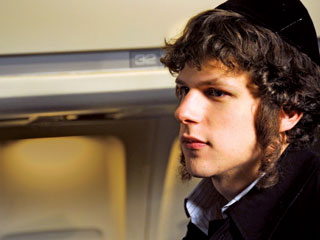 You'll also spot Justin Bartha as the guy that gets Sam involved in the illegal trade. Justin is most recognizable as the groom in The Hangover and from the National Treasure movies. Ari Graynor is also great as Rachel. I only know Ari from Nick and Norah's Infinite Playlist (the role where she vomits in a toilet in the bus station and opts to pick her gum out of the nasty toilet and puts it back in her mouth).

The film is based on a true story, which I didn't realize till the end, when they do that "what happened next" text across your screen. I enjoyed it but it was sad watching Sam get sucked further and further in.
Posted by Linz McC at 2:09 PM No comments:

I got this on Netflix a few days back. I remember hearing so-so reviews on it after one of the major film fests (TIFF maybe?) but I was curious based on the cast. The film stars Carey Mulligan, Andrew Garfield and Keira Knightley.

Might I add that I was amazed at how well the young actors were cast for Mulligan's and Knightley's characters? They not only looked like them (eerily so), but they also sounded like them.

I had no idea about the plot beforehand, which made it all the more interesting once I got started.

SPOILER ALERT (and I recommend watching without reading this part) The basic story is that these three characters grow up at what seems to be a boarding school, but where you quickly discover is actual an organ farm in an alternate universe. These people have been created for the sole purpose of supplying vital organs for transplants. Once they are old enough they start the donor process, and, after 3-4 surgeries, once they have lost various body parts, they die, or "complete."

Mixed into all of this is a pretty tragic love story. Many reviewers said this film fell flat. But I was mesmerized by the general idea of the organ farms, and thought the love story was captivating and tragic. Also, the general look and feel of the film caught my attention. All-in-all, I was intrigued and enjoyed it. It made me want to read the book that the film was based on, written by Kazuo Ishiguro.

If I want to know what bands I really am loving (as if I can't figure it out...), I just look at what spends the most time in my car's CD player. Currently, the album I can't seem to remove from the player is "Sigh No More" by Mumford & Sons. I love a band I can't really pinpoint into a specific genre. I guess it's kind of alterna-folk-bluegrass. Sort of. And they are surprisingly spiritual in their lyrics. And I love that there are so many instruments in the band.


Live performance of "Little Lion Man" and "Roll Away Your Stone"


Working on getting tickets to see them at the Palladium in Hollywood next month. Hear more of their songs at their myspace page.

I'm also loving the band The XX a lot right now. Maybe I'll post on them, too.
Posted by Linz McC at 12:06 PM No comments:

I love this song. SO much. But I have never listened to Sia perform live before and she pretty much blew me away.  So without further ado, here's Sia with "Breathe Me" (and ignore the guy yelling...).

Thanks to my pal Steph for posting this on FB so I could obsess over it.
Posted by Linz McC at 8:52 AM 1 comment:

Just a quick note as I have just completed seasons one and two of Breaking Bad. Unfortunately, season 3, which has already aired on AMC is not out on DVD yet, and I don't get the channel anyway, so I'll be waiting to see what happens next.

Anyway, I randomly added this show to our netflix queue and Sean and I both got quickly sucked in. As a quick synopsis, Walter White is a high school chemistry teacher, married with a teenage son, and another child on the way. The news comes that he has terminal cancer and Walt turns to a former student, Jesse, to form a partnership to create and sell crystal meth. 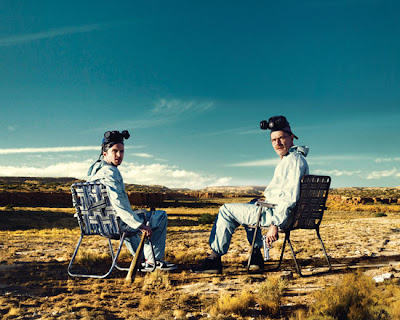 The acting is excellent. The subject matter is very tough. But there are very comedic moments, usually at the expense of dumb drug dealer Jesse (Aaron Paul). And these situations where you are laughing so hard you cry are not funny situations in reality. To call Walter White's transformation from the first episode to the end of season two "dramatic" would be a complete understatement. I have no difficulty understanding how Bryan Cranston has won two Emmys for the role, and that the show itself and actor Aaron Paul have also received repeat nominations. If you aren't watching this show, do yourself a favor and get to it! And have tissues handy, both for the laugh-til-you-cry bits, as well as the devastating moments that come quite regularly.
Posted by Linz McC at 7:37 PM No comments: