Well, last year's Christmas post involved a photo of me with Ryan Gosling and the witnessing of my sister's new baby on Christmas eve. That WAS an exciting Christmas. Well, this year, I don't have that kind of thing to report, but I AM with family (my husband's) and enjoying the season.

I pray all my handful of readers are healthy and well and have a joyful holiday! Merry Christmas!

This made my day: A Glee flash mob!!

Found this over at GMMR and couldn't resist reposting it! 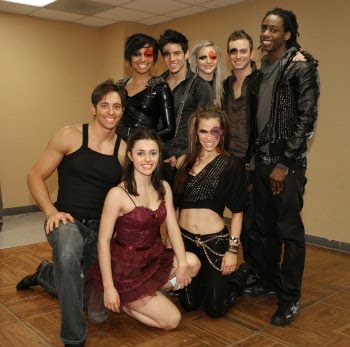 First off, I don't like Cat's gold shorts getup, but I love her legs. I want them please. I am also disappointed that Ashley won't be performing tonight and am curious how her partner will get by without her. Choreographer substitutes?

Kathryn & Ryan - Disco by Doriana Sanchez
First off, is Ryan wearing a plastic shirt or does it just look like one? No, it is just sparkly and see-through... Now I should warn you that I am rarely a fan of Doriana's disco routines, but I had high hopes for Ryan in this dance, if his height doesn't make him an awkward partner. I don't know if their chemistry was off or their timing, but I just wasn't feeling it from them. But Adam & Mary loved it, so what do I know? I guess I agree with Nigel more on this one: something was off.

Cha-Cha by Jason Gilkison
I think Kathryn is lucky to be paired with Ryan for this one because Jason said it is really hard! Kathryn looked super sexy and the dance had a really fun, kinda raunchy feel to it. It really sucked me in. I just really enjoyed it! Judges thought it was hot, too!

Molly & Jacob - Viennese Waltz by Jason Gilkison
Last week Molly showed us that working with a more mature dancer matures her own dancing. I think Jacob is such a mature dancer so I was looking forward to seeing their stuff. Too bad they got a Viennese Waltz... But once they started dancing, I was captivated. From the beginning there was a lot of emotion in their performance, which really helps me to ignore the fact that usually I find the Viennese Waltz kinda boring. This wasn't boring. I thought Molly was great, but my heart belongs to Jacob. Vive le Jacob! The judges adored it, too.

Broadway by Joey Dowling
There is a cute scheming story behind this dance. I was excited from the video beforehand to see these two in this dance. Major plus from the very beginning for dancing to Annie! And of course Easy Street (this one includes Kristin Chenoweth singing) is perfect for their con-artist ways. Loved it once they did the wardrobe change and wer suddenly living it up on Easy Street. Fun dance. Jacob was amazing as usual (are you tired of me going on about him yet?).

Ellenore & Legacy - Contemporary by Travis Wall
This dance has a Mr. & Mrs. Smith story behind it. I am usually a fan of Travis's choreo so I was excited for this one. Did I miss the significance of the towel somewhere? It was well-danced and had some really great tricks (Legacy has skillz, yes, with a "z"), but it felt kind of cold to me. Maybe it was meant to? I think maybe it was just meant to feel cold. I don't think I have ever NOT liked a Travis routine. Sounds like the judges loved it!

Hip Hop by Tabitha & Napoleon
We were warned that it was strange. And it was strange. But I like strange! This isn't Legacy's kind of hip hop so I think they were both doing something out of their own style here. They added in a few tricks for Legacy to do. It was OK. It wasn't amazing, but it was fun. The judges didn't love it.

Russell - Hip Hop by Shane Sparks
Good to see Shane and have him back. It was a fun down-n-dirty hip hop routine and I wish we could have seen Ashleigh perform this one with Russell. But Russell performed the heck out of it nonetheless. It was pretty good, but missing something since I am not familiar with his partner (Rachel is Shane's assistant). The judges praised his hard work and technical skills.

Bollywood by Nakul Dev Mahajan
I'm not only disappointed for myself that we don't get to see Ashleigh perform this, but for Ashleigh herself. She deserves to have danced these dances! But Russell looked so so good and was lucky to be stuck with such an experienced partner. They looked great! I bet Russell never imagined himself dancing Bollywood!

Solos:
Ashleigh - She didn't get to dance it since she is hurt.
Jacob - Could not stop staring at the legs. His solos are always beautiful.
Molly - Her solos are cute but never blow me away. She just often feels REALLY young to me, I guess. This solo was good, but I don't have a whole lot more to say about it.
Legacy - I wasn't sure what was going on with the phone he was holding. His tricks are always great. But maybe I wasn't paying attention or something because it didn't impress me as much as it has in the past.
Ellenore - I love her solos. She is so quirky but so clearly talented. Tonight's was no different.
Russell - AKA santa Claus (but I don't think Santa has those moves). The solo wasn't amazing because his shoe fell off, which he worked into the routine, but he didn't do as many tricks as usual because of it. He's good on the spot, though!
Kathryn - Her solo was really good tonight. Evocative. I think she is a really talented dancer. Why isn't she more popular? Personality?
Ryan - Let's face it. Ballroom dancers are at a disadvantage in their solos. And they always look the same. The onely one that sticks out in my mind is Pasha's cape dance. So Ryan's was fine but not memorable.

Tapeworthy has all the videos up if you missed the show!

I really can NOT say who I think will go home or who SHOULD go home. Really tough call. Makes for a good show, though!

They guilted me into voting so I voted for Jakob a few times. ;)
Posted by Linz McC at 6:05 PM No comments: