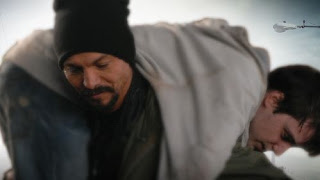 I had heard A&E's new show, The Cleaner, Was starting tonight, but really didn't know anything about it. I decided to tune in because I have little-to-nothing to watch these days, especially on Tuesday nights. Also, I like Benjamin Bratt (I would like to say that I like him based on some stellar movie performance, but the truth is that my love for him is based on Miss Congeniality). Also, Grace Park (Sharon from BSG) is in it.

The premise is a former addict (William played by Bratt) who "helps" other addicts to get clean. But not in the usual manner. He and his rag tag group of characters set up unconventional interventions for clients. As a former addict, William knows that these addicts have to want to get clean for themselves. So he arranges detailed events/situations to allow for people to make the decision for themselves.

In the meantime, William holds ongoing out loud conversations with God. I believe this is based on an agreement he made with God to save him from his addiction, and allow him to be with his family instead.

It is interesting that this show is on the same channel as the successful reality show Intervention, with the obviously-similar subject matter. A&E must really enjoy intervention. The show really does a good job of portraying drug addicts, and the difficulties they encounter in trying to stay sober.

I really liked the premise of this show, and if I hadn't been so tired I could have paid more attention. Compared to the other pilot I have watched and reviewed lately, this was not even comparable. The production value of The Cleaner was so much higher, the subject matter handled so much more compellingly, the actors so much more skilled. Just can't be compared. I would definitely give this show another watch, I just wish it came on before 10pm, because I am apparently ancient and get tired too early.
Posted by Linz McC at 10:06 PM