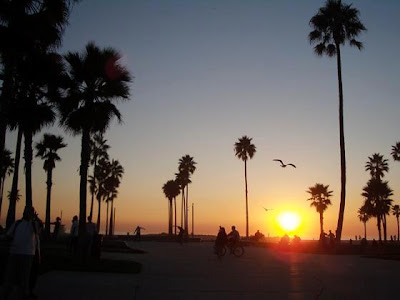 With summer coming to an end (I gauge it based on the TV season, since I haven't got a job or school...), I was thinking back over my summer, and thought I would write up a post of my summer memories, 2008.

California - First and foremost, I moved to Los Angeles from the Dallas area in May. I grew up in Texas, lived in Kentucky for 4 years, Savannah, Georgia for 3 years, Texas again for 3 years, and then we made the move to the west coast. It is a different world out here, but we are settling in. The weather is wonderful, there are tons of things to do, and I am sure there are some really fun and cool people out here (I have yet to meet them, though...). It will be interesting to see where life takes us next.

Lost - Sean and I decided to watch the entire 4 seasons of Lost from beginning to the end of season 4. This was in preparation for the coming 5th season. In January. I swear, our original intention was to watch it over the 8 months before it started up. Instead, we couldn't help ourselves and watched the entire thing in a matter of months. See my opinions of Season 1, Season 2, Season 3, and Season 4.

Flavors of Entanglement by Alanis Morrissette - It is fitting that as I write this post, a song from this CD came up on my itunes rotation. I can specifically think of different times in my life when I think of Alanis albums (Jagged Little Pill = high school, Supposed Former Infatuation Junkie = college, Under Rug Swept & So-Called Chaos = newlywed living in Georgia) so it is fitting that I add this album to my summer list. I have listened the heck out of this album. See my thoughts here.

Twilight series - I picked up Twilight at the library a bit ago, and a few weeks later, I had torn through the whole series. I can see why it has such a following, while I don't think it is the best writing I have seen, even in the "young adult" genre. But Stephenie Meyer sure knew how to suck a reader in. Here are my thoughts on Twilight and Breaking Dawn.

So You Think You Can Dance - I am huge fan of SYTYCD, and have watched loyally since the first season. This season I blogged intermittently about it (as well as I could without a DVR). I also guest-posted on Vance's blog. I was cheering for Joshua since his audition because he was from the DFW area where I am from. Plus, I liked his skill and his personality. I was proud of him and glad he won!

Musicals - Over the course of the summer, I went to Broadway, saw Wicked again, and got to see the Jersey Boys tour. Unfortunately, due to my move I had to miss Hairspray, for which I had tickets. But my friends Dawn and Cody went in my spot, so it was all good. Stay tuned for my thoughts on 9 to 5 next month.

Dr. Horrible - This was the summer of Dr. Horrible, Joss Whedon, Neil Patrick Harris -- take your pick! I am a huge fan of all three, and I have given Dr. Horrible's Sing-along Blog a number of viewings. I have even learned the songs well enough to sing them on my own (which I enjoy doing often). It is goofy and backward. One should give it a try (it is not required for you to love it like I do)

The Dark Knight - I had been waiting for The Dark Knight to come out since the moment it was announced that there would be a sequel to Batman Begins. I am a HUGE Christian Bale fan, and have also enjoyed Christopher Nolan's movies in the past. I remember finding out that Heath Ledger would be our new Joker. I recall thinking it was strange casting. Well, it turns out the whole thing WAS strange, and the perfect call. I would be a horrible casting agent, I think. The film ended up being THE blockbuster of the summer, breaking all sorts of records. See my thoughts on the movie here.

Chipotle - Yeah, it turns out that Tex-Mex and Cal-Mex are very different. I can't find enough grease and cheese in any of the places here. So I bury my loneliness for good Tex-Mex at Chipotle. Don't get me wrong, it is no Moe's. But it is always satisfying. In the meantime, can someone point me to some good Tex-Mex!! I need to go back to Texas for a visit to Cristina's or Mi Cocina.

The Pool - The one constant here is that I spend a lot of time by the pool. More recently, I have gotten in. Perhaps the Olympics have spurred me on, but I have been doing laps and it feels mighty nice. I live in the perfect weather where it never rains, is rarely overcast, constantly 75 degrees, and the pool temp is regulated. Perfection!

Other TV Shows - I have also filled my time by catching up on some TV favorites and new shows. Here is what I have managed to watch: Veronica Mars (seasons 1-3), Moonlight (season 1 - gave it a try, but it just didn't do it for me), Skins (seasons 1-2), Dexter (season 2 - in progress).
Posted by Linz McC at 8:45 PM

Nice summary of your summer! There's a book by Amy Wilentz on her family's move from New York to Los Angeles and the differences between the two. I can't remember the name, but it's supposed to be good.

That sounds really interesting. If I were any kind of writer, it would be fun to point out the differences of living in the Old South in Savannah and living in Los Angeles.

If you have ever read Midnight in the Garden of Good and Evil, that is really what it is like in Savannah. Just a different world.

There's a difference between Tex Mex and Cal Mex? the ONE food we don't really get much of up here in Canada is mex anything so i love it when I come down there. Seriously, do the Mex just stop at the border of Canada? (I thought we let anybody in?)