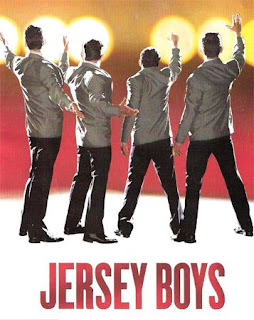 I caught Jersey Boys on the the last week of the national tour's stop in Dallas last week. I actually planned my trip back to Texas at this specific time so I could go see the show (I have had tickets for months, way before I decided to up and move to Cali). I had heard great things about it, and therefore had really high hopes. It didn't let me down.

I didn't know any of the actual story of Frankie Valli and the Four Seasons, but thanks to summer road trips growing up, I knew about half of the song lineup. I love songs from this era, and Frankie Valli's voice is so unique that their songs are easily recognizable. Plus, they are really catchy.

The actual storyline is a biographical account of how the Four Seasons came to be, told by the four different members. The group was started in New Jersey, hence the name. The quartet deals with members coming and going, difficulties of the business, life on the road, gambling debts, marriage failures. The story was interesting, but the music just absolutely carries the whole show. And the talent of the performers.

There is certainly a suspension of reality as the audience is transported back in time to the 1960's. Most of the theater-goers were older, and were probably fans when the Four Seasons were popular years ago (I went to the show with my father-in-law, after all). The beginning of this "magic" comes with a trio of songs a ways into the first act (Sherry, Big Girls Don't Cry & Walk Like a Man). I heard an interview with the touring cast regarding this portion of the show. Basically, they pointed out that the audience reaction to these songs is not so much for their acting/singing abilities, but for the songs themselves and the sound that the Four Seasons created with their music.

This touring cast was really good. Really good. Especially Frankie (Joseph Leo Bwarie, whose falsetto was like melted butter - yummy! His voice never faltered, not once) and Bob Gaudio (Andrew Rannells, who played his role in such a likable way, especially singing December 1963). I would catch this tour one more time if I could.

Some favorite tunes (but aren't they all pretty good??):
The aforementioned medley of Sherry, Big Girls, Walk Like a Man
December, 1963 (Oh What a Night)
My Eyes Adored You
Can't Take My Eyes Off You
Who Loves You

I guess those are just all the popular Four Seasons tunes, huh?

I'm glad you had a great time. And you went with your father-in-law. That's so sweet!