I got home the other day from Jacksonville, where I attended the American Idol auditions. I did not try out myself (it is devastating to say that I am just a few months too old...), but I went along for the ride anyway. I was curious about the process, and while my sister didn't make it past the first round, I got plenty of scoop on how things really go down.

1) Wrist bands. For two days prior to the auditions, contestants can go to the arena and pick up a wrist band and a ticket. This also decides the basic order of auditions because the tickets place you progressively further around the arena.

2) Morning wait. You are supposed to arrive at the arena at 5 am at the latest but people were lined up much earlier. We got there at 4:30 and had to walk a good ways down the line ( a very wide line, not just one person, but a crowd wide). Of course, after us, the line was probably stretched another quarter mile. Apparently there were tornado watches and a thunderstorm warning, and after standing in the rain for about an hour, we finally got in. Imagine all those girls with their hair all fixed up, standing in the rain. Even with umbrellas, people looked a mess. 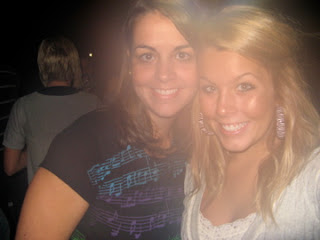 It was so steamy in Jacksonville that my lens fogged up! 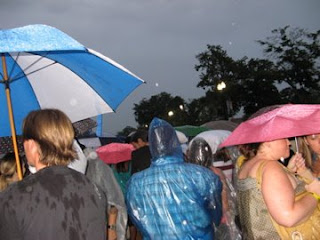 The umbrellas block the view to show how many people there were packed in this line, waiting to go in.

3) Arena. The contestants were filed into the arena, filling the entire bottom section of the place. There were supposedly 11,000-12,000 people there just to audition. If half the people brought someone with them that was not trying out, there just could not possibly have been that many. It wasn't full enough. 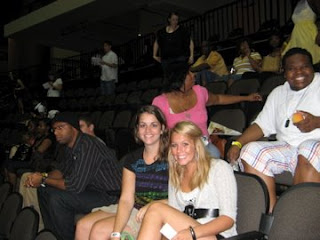 Ignore how gross I look. I was so sweaty from the humidity.

4) The show. For a good two hours before the auditions begin, the audience participates in filming, where you scream "Welcome to [enter town name here]" and sings a couple of obligatory songs. I got to partake and there was lots of energy (this was pre-dream-dashing) in the room. Ryan Seacrest came out, hyped everyone up, filmed some segments for the audition show. It was all very interesting. 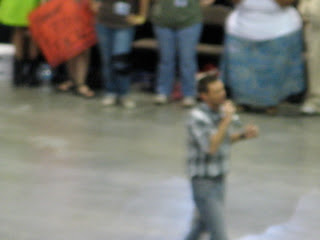 Yeah, this is the best shot of Ryan I could get from so far away...

5) Auditions. A series of booths are set up across the arena floor, separated by a curtain. Probably 10 or 12. At each one, there are two judges. Contestants are filed down to the floor, set up in groups of 4, and queued into lines at the tables. Each group of four arrives at the front of the line. The first auditioner steps forward, lays their souls on the line by singing for up to 30 seconds, and then steps back. The other 3 follow suit, and then the judges confer. Those auditioning are called forward to all be dismissed for the most part, with the occasional person being asked questions, asked to sing something else, or given the coveted golden ticket. Those that receive this yellow sheet of paper are sent off into the unknown (but what I assume is another audition with producers, and a scheduling of the call-backs, which may (or may not) be Randy, Paula & Simon). 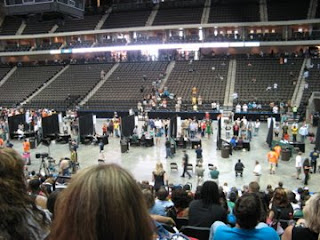 Here is a shot during the auditions of the arena floor. SO many people.

Overall, this was a fun and interesting experience. I don't think I need to do it again, but now my interest has been satisfied.
Posted by Linz McC at 7:33 PM