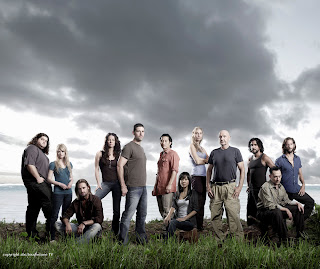 A couple of questions/thoughts raised by my second viewing of Lost, Season 4:

1) Did the writers originally intend that the captain of the freighter would be something horrible and scary? When he is first brought up, Desmond & Sayid are told something along the lines of "Oh, you don't want to mess with the Captain," but when we meet him, he is a sweet little puppy dog of a guy. Maybe the writers decided to transfer the scary part of his character to Keamy, who mercilessly kills a number of island-dwellers, including Alex, in one of the few moments where the viewer can actually feel bad for Ben.

2) I was thinking that a jump 3 years ahead before the Oceanic 6 feel the need to return to the island feels extremely long. Do you think that it would have taken that long before each of them felt compelled to go back and save their friends? My only thought is that Walt has to go back with them, and because the actor is 3 years older now, the time lapse had to take place.

3) Who all has to return to the island? Just the ones who were on the plane? I know that the O6 has to return, I would guess that Walt has to go, but what about Desmond and Frank Lapidis? Do they have to go back?

4) We know better than to think (my favorite Lost character) Desmond is finished. My guess is that Ben is able to find Penelope and steals her away. Desmond is therefore forced to follow, which in turn leads him back to the island (or something like that).

5) Often the island-whispering/dead-people bring coinciding points of view. Some are told they must return (Jack, Hurley). Some are told they can't return (Kate is told by Claire not to bring Aaron back). Sometimes these ghostly visions bring danger, sometimes safety. It kind of drives me nuts.

6) Sayid is angry at Michael for working for Ben in an episode that comes only a few after Sayid is working for Ben. Is it just Nadia's death that leads him to the quick change? Does something else happen? Which leads me to wonder if much else happens at all besides the Jeremy Bentham visits during this time that will prove important.

7) We spent all of our episodes this year focusing on the Oceanic 6's futures and the pasts of a few of those that didn't leave the island. What the heck has been going on on the island for the last 3 years? Are some of good friends (Sawyer, anyone?) just living on the island? Are they dead? Are they in hiding? Just dying to know.

8) Two of my top LOST episodes of all time (so far) occur in Season 4: The Constant (Desmond's time-traveling and Penny-calling episode) and The Shape of Things to Come (Ben's desert-appearing, Sayid-taming episode).
Posted by Linz McC at 7:19 PM

Really good points. I also loved The Constant. I think that next season will be structured with "present time" off the island with the O6 and flashbacks on the island with Locke and Sawyer, etc.

But we have to wait another four months--arrrrgggghhhh!

I had intended to drag out my re-watching of the first four seasons over a much longer period of time. But I just couldn't help myself (and nothing good is on TV right now...). I don't know what to do with myself now that I am done. I am watching Season 2 of Dexter which helps to take my mind off of Lost. :)