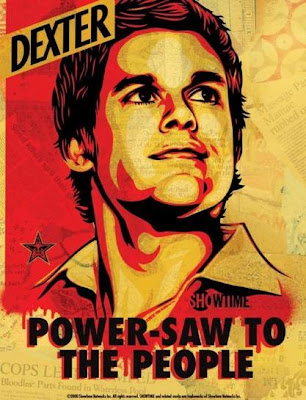 WARNING: THIS POST IS VERY SPOILERY. DON'T LOOK. EMILY, I AM TALKING TO YOU.

I caught the first season of Dexter last summer when it was released on DVD. It was so well-written, well-acted, and well-produced, and I just can't say enough good about it. After I watched Season 1, I read the three Dexter books by Jeff Lindsay, on which the series is loosely based. Also, Michael C. Hall is wonderful in this role. I first liked him as David Fischer in Six Feet Under, but I must say that Dexter is such a unique role and Hall absolutely nails it. Alright, enough going on and on... Here are my thoughts on Season 2 of Dexter:

1) I so enjoyed the Ice Truck Killer arc last season that I was worried the writers would not be able to come up with a story-line for this season that would be as engaging or that would make sense to last an entire season. So the discovery of dozens of bodies, murders amassed by the Bay Harbor Butcher (aka Dexter), certainly got the season off to a running start.

2) The entire story-line of untrusting and anti-feminist Lt. Pascal was just annoying. I thought, "Come on, is this all the writers could come up with?" The payoff that LaGuerta was sleeping with Pascal's fiance to drive her into losing her job was only moderately satisfying. LaGuerta's character was established as a "whatever it takes" pragmatist, but it was a less-enjoyable plot to get there.

3) Rita finally gave her prying, controlling mom the boot, and I couldn't have been happier. Instead of "helping" as she said she was doing, she only stirred up trouble and exacerbated the problems between Rita and Dexter. Sometimes for Rita's sake, I wish she could not be quite so clueless, but then I would be disappointed that she and Dexter weren't together.

4) We ARE supposed to root for Dexter, right? From the very beginning of Season 1, the viewer finds himself cheering on Dexter to kill those big bad guys and to get away with it. But as this season progressed, I found myself frustrated with the way Dexter was handling his "recovery" and the road it was leading him down. He was sloppy, he was mean, he was too impulsive. And I was more afraid of him that way (breaking into someone's house to have sex on the stranger's bed? Please!) than when he was killing people left and right! Also, I was only half-cheering for Dexter to get the better of Doakes, because I didn't like how Dexter was being toward him. His cunning was impressive, but at the same time, he didn't seem to be as sensible in his quick decisions.

5) Don't get me started on Lila. I knew from the preview of the season last year that Dex and Lyla would get involved, but I blocked it out for several episodes as he seemed to really be breaking through some of his old bondage and "healing." But let's not forget that Lila is also an addict and she admitted to burning down a house (with a person inside). She was not exactly sane, and probably not the best resource for our Dexter. Turns out, nothing could be truer as she turned out to be completely freaking insane. But she also saved our dear Dexter and allowed for old Doakes to take the blame, so i guess it is a good thing she was nuts.

6) There wasn't much as satisfying this season as Deb telling off Lila and telling off Dexter for sleeping with Lila and screwing things up with Rita. She smelled a rat from a mile away and wasn't ashamed to say so. I wasn't crazy about the Lundy relationship, mainly because it was so obvious she just needed someone acting as "dad" and then to get involved was odd. But not as bad as I thought it would be, and it helped Debra to grow up a good deal.

7) Dexter was THIS close to confessing. In what world did he think he would not get the death penalty. He actually said something about 20 to life. What? More like 40 life sentences if they didn't put him down completely! But it sure was amusing in those scenes where he imagined telling his sister the truth. I laughed till I cried (after I got over the initial shock, where I thought he had really told her).

8) I have never liked Doakes. I always thought he was a jerk, and Dexter saw the dark in him, too. However, once Dexter and Doakes; had their initial showdown on the dock, and Dexy locked him up, they had some pretty sincere conversations. I thought, perhaps, they were bonding over their dark secrets. It was sad Doakes had to die. I had decided Dexter couldn't kill him. It just seemed wrong (especially since "code" says not to kill an innocent man).

9) What was with Dexter's hair this season. Multiple times I thought it looked like a wig. And so many times it was completely messed up or huge like a helmet. Michael C. Hall is a good looking man. Let's fix that hair up a little better in the future...

I can NOT wait till Season 3. I don't know how I plan to watch it without Showtime (or if I am just going to have to wait for it on DVD... NO!), but the writers haven't let me down yet!
Posted by Linz McC at 9:24 PM

I watched the first season of Dexter and honestly I didn't really feel into it. It's just like watching someone too super compared to the people around him. The story was also a bit slow for me. In the end, even though the second season is available, I opted not to watch it. The acting was also rather mediocre for me, another negative point why I chose not to continue watching this. Well, maybe it's just me.

1. I think during the showdown with Dexter and Lila it came out that she was no more an addict than he was. I believe he said she just attended the meetings because she (like him) was empty inside and need the vicarious fix of human emotion.

That being said, I still think she burned her boyfriend's house down. I mean, she was a bit of a pyro, eh?

2. Dexter's hair - Do you mean his hair during the flashbacks? Because, yeah, it was quite horrific. But I believe it was to indicate a younger, not quite so poised and polished monster. Other than the flashbacks, I didn't notice any problems with his hair...

3. I agree with everything. I really hated the portrayal of Pasquale as such a shrill nutcase. I think maybe the writers felt like they were getting off-track by bringing her character into the mix with an already very complex set of storylines and just took the quickest, easiest out.

I also was skeeved by the Debra/Lundy relationship. I liked the hero worship/father figure, but once it got sexual it turned me off.

e.f. - I can see how this show would not be for everyone!

stella - Ha! I know Dexter's hair in the flashbacks is a wig (a la Mark Wahlberg in Boogie Nights), and it surprisingly helps to make him look a bit younger. If I didn't figure that out, I would have a whole new set of problems. For some reason his hair (in the current time) was fluffier than it should be, in my opinion.

Maybe just the Miami humidity? They did go on and on about how hot and humid it was.

"Fluffier" would be a very flattering way to describe how MY hair gets in humidity!

Heaven knows how fluffy mine gets in the humidity. I will forgive it of Michael C. Hall because he is mighty handsome :) And I will forgive you and me for our fluffy hair, too...