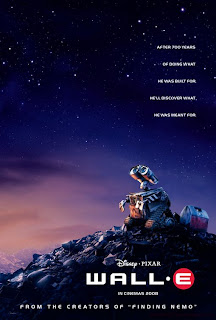 OK, so here is the deal. I am not quite on the Wall-E bandwagon with everyone and their dog. I didn't dislike it, but I am not feeling the Academy Award Best Picture thing that is being promoted.

We went to see Wall-E yesterday afternoon. We knew going on opening weekend might be difficult because that means the theater would be packed with children (and apparently crying infants??). But I always find that to be part of the fun of seeing an animated movie, because I am amused at what kids laugh at versus what adults laugh at (This made more sense seeing a movie like Shrek over seeing Wall-E, which doesn't have the same number of fart jokes that Shrek does). Wow, most of that sentence was in parentheses.

So, anyway, I wasn't sure I was all that interested in this movie. I haven't been all that interested in the story since I heard the synopsis a LONG time ago. I love Pixar movies, but something about this one didn't look all that exciting to me. But, alas, Sean wanted to see this one pretty bad. It was one of the movies he had been anticipating for a while. Even my least favorite Pixar movie (Cars) is really fun and well-done.

The general storyline, if you don't know it, is that, 700 years in the future, humans have left earth in a pile of rubbish, with a number of robots staying behind to clean up. But only one is still running, and that is the lonely and goofy Wall-E, who has managed to somehow develop personality and emotions over the past 700 years. Well, Wall-E's life is turned upside down when a rocket lands on earth and a much more technologically-advanced robot (a girl!) sets out on a mission to locate something specific. What follows is a sweet love story and fun exploration of one possible scenario for our future (let's hope not).

It is hard to ignore that Pixar has shown us an earth that is absolutely trashed, to the point we had to leave and live in space. Even worse is the condition of humans, who, while very amusing, are a pretty sad commentary on where we are headed as a race. Andrew Stanton has stated that he wasn't really trying to push any ethical environmental messages with this film, but that would be hard to ignore.

Another interesting thing of note is that, per Andrew Stanton, Pixar doesn't write a movie with an audience in mind, but they make a movie that they think would be fun to watch themselves. They don't worry about "Is this movie going to be a kids movie?" or not. I like that. But I kind of miss their more "kid" movies. Finding Nemo and Monsters Inc. are my favorites. I am willing to go along with these changes, but I am also glad that Toy Story 3 is in the works. And while I wish we could see some of the original Toy Story writers on this one, I am glad to see they have brought in Michael Arndt (of Little Miss Sunshine fame) to try his hand.

Alright, I have gone on and on with this one. I liked it. Didn't love it. Pixar is held to such a high standard that it is easy for it to fall.
Posted by Linz McC at 8:53 AM

Wall-E totally looks like the robot from "Short Circuit"... minus the cheesy 80's style of course