Movie: In the Valley of Elah 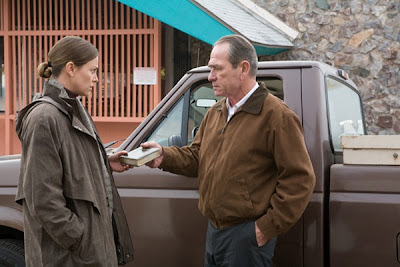 I just finished watching In the Valley of Elah (named for the valley where David defeated Goliath in the Old Testament), a movie that is makes more impact when the viewer knows that it is based on a true story. The basic plot is that a soldier returns from deployment in Iraq, only to go AWOL. His father, a former military police officer, starts his own investigation, knowing his son would not disappear without telling him. His investigation leads down a sad, deceitful, twisty road.

This film is like a mini-reunion of actors from No Country for Old Men. In fact, I would not be surprised to find out they were filmed in relatively close locations and similar times. Both films included Tommy Lee Jones, Josh Brolin, and Barry Corbin. Also in Elah were Charlize Theron (my favorite role of hers was Rita on Arrested Development), Susan Surandon, James Franco, Josh Tucker, Jason Patric (Good grief, did I miss anyone? There were so many people in this). I believe Tommy Lee Jones was nominated for an Oscar for this role, and he was really good. After I saw No Country, I was reminded what a great actor he is (if I can ignore such movies as Space Cowboys and whichever Batman he was in).

This movie maybe tried a bit too hard to make its point. And that is something that would be more annoying if the reality of what it dealt with was not so in-your-face right now with soldiers returning from the horrors of war, and dealing with coping on their own. It was just sad. And made me feel like I felt after I watched Jarhead last year (well, not quite so disturbed). Just depressed about the experiences these guys go through.

This is a good movie, but not a great movie. Worth Netflixing if you don't know what else to get.
Posted by Linz McC at 9:33 PM

I recently Netflixed this as well. I think it also shares a lot thematically with No Country for Old Men in addition to cast members. In fact, Tommy Lee Jones essentially plays the same character: an old school guy with honor and integrity at a loss to deal with the lack of both in the modern world.

Thematically In the Valley of Elah shares with Stop-Loss as well in portraying a war where the casualties are worse than death or dismemberment, but with the erosion of humanity of the soul.

That's a good point that TLJ's character was pretty much the same. I liked him more in No Country, but I think that was because of the general feel of that movie.

I thought of Stop-Loss while I was watching this, but haven't seen it. Worth a viewing?

I like No Country better as well. I think Stop-Loss was interesting as far as depicting the fact that the war is being fought by teenagers for the most part. I remember seeing these pimply faced kids in tanks in Michael Moore's Fahrenheit 9/11 and being so struck as how obscenely young our military is.

There are some interesting aspect to Stop-Loss--in addition to the post-traumatic stress, the physical impact of the war (soldiers who are horrifically wounded--alive due to superior medical techniques yet seriously maimed and deformed for life) is touched upon.

It's a pretty good film--not great. Hard to watch as most war films are...

I watched this movie, too. TLJ was great. Actually he was far more dominating compared to the other film No Country for Old Men. For the latter, I was definitely too awed by Javier Bardem's performance that I consider TLJ's role was too minor in that movie. I haven't seen Stop-Loss, but it seems to be promising.