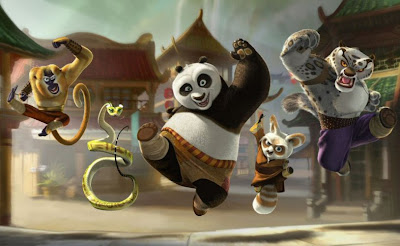 I wasn't dying to see Kung Fu Panda, even though I had heard such praise for it. With my husband being an animator, we usually see all the 3D movies in the theater, but they aren't always very good. Dreamworks animated movies seem to be hit-or-miss (love the first two Shrek movies, didn't love Madagascar so much). On top of that, there are so many movies out right now that I do want to see, but I agreed to see Kung Fu Panda because Sean really wanted to see it.

OK, I just rambled on and on. Here is what I thought of the movie: I liked it! Jack Black was great as Po. The character is really funny, and bumbling and nervous, and an ordinary Joe Schmo. Sean and I are amused at the "stunt casting" of voices for animated movies, considering it wouldn't really matter to a 6 year old if Jack Black plays the main character or not. I guess that is for those of us who watch these movies even though we don't have children and haven't been one ourselves in a decade or two. It is a guessing game of "whose voice is that?" In this movie, I had to guess: Dustin Hoffman, Angelina Jolie (OK, I already knew those two), Seth Rogan, David Cross, Lucy Liu (I didn't actually guess hers) and Ian McShane. But the truth is, it would have been good anyway, because the story was good and the animation was good.

I highly recommend it if you have kids, but there might be parts that are a little scary for the tinier tots. I also recommend it for those of you that don't have kids and are considering seeing it anyway.
Posted by Linz McC at 8:32 PM

I've reviewed it on my blog, too. Actually, the only thing that I like from Kungfu Panda was the animation. But after I was getting used to it, I fell asleep at the theater because of less interesting plot.