In honor of the Tony Awards tonight, I decided it is high time I post my thoughts on some shows I saw last month on a girls' trip with my mother-in-law, sister-in-law, and almost-sister-in-law. I got wrapped up in other things and never got back around to this post. And now, it makes even more sense, since this is the first time I have ever actually seen a new show that could even be considered for an award. Three of the four I saw were new, and therefore, got at least a couple of nominations. 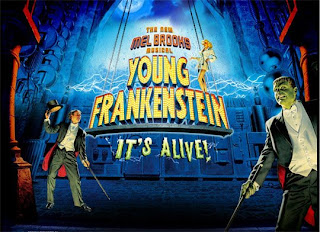 Young Frankenstein - This show didn't get the best reviews, and was over-looked for the Tony for best Musical this year, but that didn't stop us from seeing it. My almost-sister-in-law really wanted to see it, so we decided to go for it. I would say this was the favorite show among the four of us. It was fun, the biggest "production", silly, and in classic Mel Brooks style. The stand-out performances for me were Megan Mullally (Karen from Will & Grace) as Elizabeth, Christopher Fitzgerald (nominated for Best Featured Actor in a Musical) as Igor, and Andrea Martin (nominated for Best Featured Actress in a Musical) as Frau Blucher. We had Roger Bart's understudy, and while I would have loved to see him in the title role, the US Jon Patrick Walker did a fine job. Puttin' on the Ritz was the best performance, as it brought out a large number of dancers and had some impressive special effects, on top of being pretty funny. Really fun.

One instance was odd and amusing. The stage went dark for a scene change, and as the music started, the set did not come out. They stopped and restarted the song and again, the set was a no show. The lights came up and the director (well, who I assume is the director) stepped out to tell us there was a technical problem. All-in-all it took less than 10 minutes. 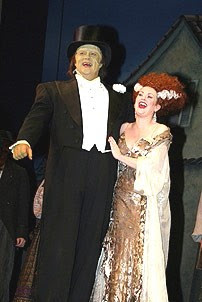 The lights went down and the music swelled and...the cottage (which had seemingly gotten stuck off stage) appeared on stage. The actor (Fred Applegate) who was sitting in it when the lights came up handled the situation with style by saying, "Sorry I am late. I missed my first cottage and had to catch a local." To which the crowd erupted in laughter and hollers of approval. Then he proceeded to his performance. He was very popular during the curtain call as well.

I can see why this did not live up to the expectations people would have for a new Mel Brooks musical, after the popularity of The Producers. My biggest problem was that the songs were just not memorable. They advanced the story, but they didn't prompt me to want to buy the cast recording or to hum along to them later. The only memorable one is Puttin' on the Ritz, which we all know was not written for this musical in the first place. 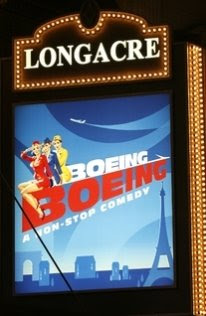 Boeing - Boeing - These were last minute tickets bought at a discount. And what do you know? We happened to be going on opening night. There was a number of names in this one but we didn't know what to expect after seeing it described as a sex farce. According to the woman sitting next to us, farce is the most difficult theatrical genre to pull off. The first act was a little slow in the setup, but the second act paid off. It was a lot of slap-stick kind of goofy and physical comedy. And once you got used to it, the whole thing was just a lot of laughs.

While I have never heard of him, Shakespearean actor Mark Rylance easily stole the show with his goofy Midwestern character Robert. 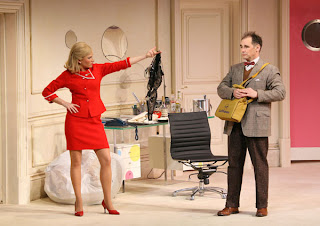 His Tony nomination was well-deserved, and while I haven't seen any of the other nominated actors, I would believe he deserved it if he won. Christine Baranski was great, but her French accent took some getting used to. Bradley Whitford was a little odd in this kind of role. I think he pulled it off, but I had a hard time adjusting to him being a laid back playboy. Mary McCormack was hilarious as the German flight attendant Gretchen. 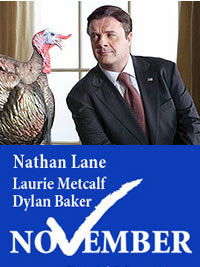 November - I am not a fan of political satire. This show was funny. The number of F-words dropped in a short amount of time was slightly awkward as I was sitting next to my mother-in-law during this show. But she picked it out and was interested to see Nathan Lane, who was funny in the show. Laurie Metcalf was great as the President's speech-writer. Not my style, but well-done no less. 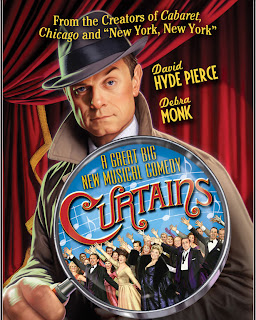 Curtains - This is the only show that wasn't new for 2008, and going in we knew that David Hyde Pierce had won the Tony for his performance in this last year, so we were pleased to get to see him on stage. I liked Curtains. Didn't LOVE it but liked it. It was fun and the setting of "a murder investigation on the set of a musical" allowed for some campy old school numbers (like the saloon-stomping Thataway) and some sweeter ballads (Thinking of Him and I Miss the Music, as well as the reprise of the two together, later in the show). David Hyde Pierce was a pleasure to see and had good comedic timing. I was most impressed by Jason Danieley (Aaron) and Karen Ziemba (Georgia). This is a good show to see as a family, or if you are seeing something with your mother-in-law, for example... It has a real old-school feel to it.
Posted by Linz McC at 11:14 AM

Great report! It's always fun to read other people's reviews and see how they compare to mine.

I think you liked Young Frankenstein more than I did, but I liked Curtains more than you did. I loved the movie, so I was really looking forward to it. Personally, I was underwhelmed by Roger Bart. I thought David Hyde Pierce did a much better job of carrying a show and being a commanding presence in Curtains than Bart did in YF. I know this isn't fair but Bart also suffered in comparison to Gene Wilder. The movie did a great job of satirizing the horror genre, but somehow, I found the musical too light and sunny. But I liked Christopher Fitzgerald and Andrea Martin a lot.

I haven't had a chance to see Boeing, Boeing unfortunately, but it does sound very funny. Although I have to admit, I was bewildered by Mark Rylance's Tony acceptance speech. And finding out later that it was a poem didn't make things any clearer! Anyway, glad you had a good time on Broadway and I hope you get to back again soon.

Hi Esther! Thanks for the comments!

Interesting point you made about being disappointed with Roger Bart. I was rather disappointed to get his understudy, but I think, as a result, I had very low expectations. Perhaps that helped me to enjoy it more?? Is that sad, or what?

I agree that Mark Rylance's acceptance speech was insane. I had no idea what was going on. But I have to tell you that his performance in Boeing-Boing was VERY Tony-worthy (and utterly hysterical to boot)! You MUST check it out.

In the meantime, I just moved to the west coast, so not sure when I'll get back to NYC... Hopefully soon!

Yeah, I've heard so many great things about Mark Rylance's performance. I think if you had to choose between seeing him or Roger Bart, you got the right one! Unfortunately, I probably won't get back to New York anytime soon either. I wish I could see everything!

I don't know if you've had a chance to listen to the cast recording of Young Frankenstein, but if you do, you'll get a sense of why I was underwhelmed. In the song "The Brain," when he says, "That's Frahn-ken-steen!" well, it sounds kind of blah to me. I remember Gene Wilder delivering that line in the movie and it was terrific. So I was really looking forward to hearing it on stage. But it just felt kind of flat. I thought, "is that it?"

Anyway, there's a lot of great theater everywhere, so hopefully you'll have a chance to see some of it in your new home. Good luck with the move!