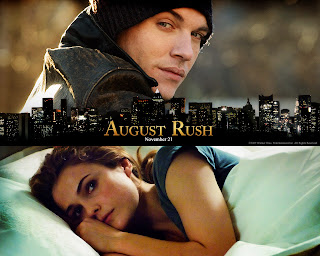 I watched August Rush last night. And to tell the truth, it was just not a movie I was really interested in. I mean, it looked rather cheesy and predictable. And I don't think I can see another movie with Robin Williams in it. Good Will Hunting was the last one...

For some reason, however, I still added it to my online movie queue, and I have to say, I really enjoyed it.
Cheese? Check. Predictability? Check. But let's look at the positives here.

Freddie Highmore as the title character - I have really liked him since he played the recorder with his nostrils on Ellen while promoting Finding Neverland (which I had not seen at the time, but watching the movie sealed the deal). He is a fantastic actor and really adorable to boot.

Music - The entire story revolved around music and I really enjoyed the performances in the film. Jonathan Rhys Meyers did all his own singing, and the rumor that he is going to be releasing his own album is welcome news. Which leads me to my next point:

Keri Russell & Jonathan Rhys Meyers - They were great as the young people who spend one night together, and then years pining for each other. I have, of course, been a fan of hers since Felicity, and she is just so beautiful. And, then how could I not love JRM after Bend It Like Beckham? Love his accent.

All in all, I knew exactly how it would ultimately end, but I really enjoyed the story as it progressed. I was rooting for August and cried at the end. Robin Williams didn't play a funny character and was bearable. I also really like Terrance Howard. The cast was great and this was a nice feel-good, family movie. Don't have amazingly high expectations for story-telling, and you can enjoy it, too.
Posted by Linz McC at 7:26 PM