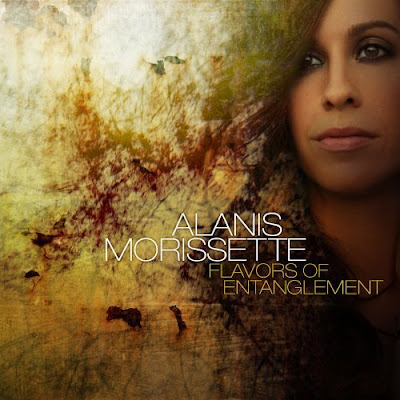 I bought Alanis Morissette's new CD Flavors of Entanglement on Tuesday, the day it was released. If you know me very well, you know that I love Alanis. I have enjoyed the evolution of her music over the years, and the less radio-play the CD is likely to get, the more I love her. But I can certainly remember many a time, my junior and senior years of high school, jamming to her Jagged Little Pill tape in my Honda hatchback, Fiona. That album is still arguably her best, but she has not received enough credit for her 3 (now 4) follow-ups.

Alanis Morissette is one of the best in the business of writing "through" the things that happen in her life, and therefore, her music is highly personal, emotional, famously angry, nostalgic. It is pretty obvious what affected the song-writing process for this album. My husband and I both stated that we felt almost uncomfortable listening to her music because it was like we were getting too much personal information.

My favorite songs on this album (so far, since my favorites change over time) are the starting-over tune Not As We, the reminiscent Torch, and the low-self-esteemer Tapes (see Unsexy and That I Would Be Good from previous albums). There are some dance-y beats on this album, too, and I like them.

I recommend the itunes Deluxe Edition album as it comes with 5 extra tracks, a couple of which are really great (Madness & Limbo No More)

This album, while better than So-Called Chaos, still hasn't reached the level of Under Rug Swept and Supposed Former Infatuation Junkie, but that may be that I just haven't listened to it enough. The truth is, Alanis does little wrong in my eyes (or ears).
Posted by Linz McC at 12:09 PM

I agree that this is a great album.

"Flavors of Entanglement" will be the album to put her back at the top of the record charts.

Her lyrics are witty and self-reflective. They are worth just sitting down and reading.

Enjoy your album, I know mine won't be leaving my cd player any time soon.