Book: The Year of Living Biblically 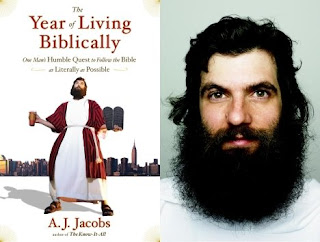 I have just completed The Year of Living Biblically: One Man's Humble Quest to Follow the Bible as Literally as Possible by A.J. Jacobs. I don't normally read books like this. In fact, I prefer fiction, but this one sparked my interest when I read a review of it in a magazine at some point. Anyway, I put it on hold a couple of months ago at the library, and it finally made its way down the line to me.

It took me a couple of weeks to read because I have had so much else going on. But it was a quick read, considering. The author is Jewish by descent but agnostic by way of religious belief. It was very interesting to see him take a completely literal approach to following the "rules" of the bible. Clearly, he wasn't able to follow all the laws of the Old Testament at all times, but he brought to light some interesting and/or VERY strange laws of the OT that no one currently knows the purpose of.

Jacobs did a good job of dealing with the laws of the Bible, but not much of the spirituality that is central to it. "Humble" is probably not the best word to describe his quest. I think the author is probably a bit narcissistic (you would probably have to in order to do this kind of writing - His poor wife!), but he is really funny and it was a really enjoyable read. I'll be checking out his other book The Know-It-All: One Man's Humble Quest to Become the Smartest Person in the World, a book about his mission to read the entire Encyclopedia Britannica.
Posted by Linz McC at 7:02 PM

i def wanna read this one!

I love books like this, where people take on a quest and then write about it. Like Julie And Julia, I think it was called. I used to think I only liked fiction too, but then I discovered all these really readable, personable books that just happened to be true!

Exactly my thoughts. I have a generic opinion of "non-fiction" as meaning "boring" but that really isn't true. I haven't read (or heard of) Julie & Julia, but I just looked it up and I think I'd love it. I better add it to my "Must Read" list.