LOST - "The Other Woman" 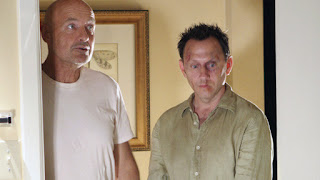 I love this show. I do. I don't care that I never know what is going on. I don't care that they ask a great deal more questions than they answer. None of that bothers me because they do such a good job of entertaining me in the process. Even an episode such as last night's "The Other Woman," which isn't as exciting as we have gotten used to this season, is still funny in parts ("See you at dinner."), awkward (that Jack & Juliet kiss), suspenseful (who are the Freighter Folk and are they going to kill our Losties by releasing the gas at The Tempest?), etc. They even answered a couple of questions. Or did they?

I don't begin to pretend that I am a Lost theorist. It is too smart for me. But I enjoy reading other people's theories and deciding what I think about what their brains have put forth as possibilities as to what is going on here.

Here is Vozzek69's theory over on Dark UFO. I agree with most of what he says. I had not considered that the encounter with Harper in the jungle was the Black Smoke Monster, but that makes plenty of sense.

I really felt like the Jack/Juliet kiss was forced and not really done at the right time. And Jack doesn't love her. What is he doing? Anyway, I found it awkward, and felt it was one of those times when it would have been a better moment if they had NOT kissed.

I assume that when Harper said, "Of course he loves you. You look just like her," that she meant Anne (or is Annie, no I think Anne), Ben's one friend from childhood. For a split-second, I wondered if she WAS Anne, but dismissed the thought. That might be too much. Or is she referring to his mother? Hmmm...

Did Ben plan to have her as "his" before she ever came to the island, or was it only after she got there? The whole here's-a-house-flowers-opera-music thing makes me think he brought her there knowing he planned for her to be his own. That was all a very strange and awkward side of Ben (with the ham in the kitchen!).

We all SO know that it is Michael on the freighter, right? Wouldn't it be the best twist EVER if it were someone else. That would be fun.
Posted by Linz McC at 8:46 AM