The Spring Has Sprung 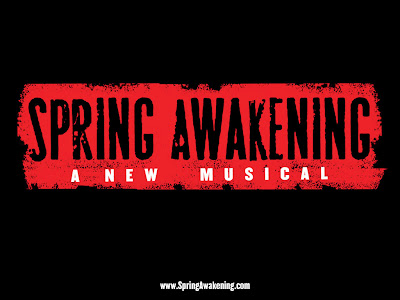 So, I FINALLY caught a production of Spring Awakening last night. It was on its fourth night touring through Los Angeles. I have regretted not catching it (and, now, probably never having the chance to) on Broadway, seeing all the rave reviews I have read (mostly from Vance, every time he went to see it...). So it was a joy to see it for the first time.

I have had the original cast recording for about a year now, so I knew all the music. I also already knew the story. So I wondered how much I couldn't just piece together without ever taking a step into the theater. Luckily for me, I needed to see it in person to experience it (it was too bad I experienced it in such a large theater, and sitting in the very back (I was dizzy when I first walked to my seat)). I'm sure I would have enjoyed it more if I had not been straining to see, but I managed alright. 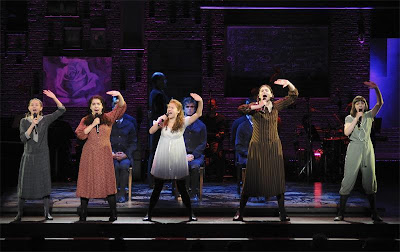 It is unfair to compare the cast I saw last night to the one on the recording, because I never really saw them perform it. So I will try to be unbiased in that manner. Let's start with Kyle Riabko (Melchior), who seemed to carry the show, both with his voice and his acting skills. I think his singing/acting/choreo actually changed my mind on a couple of songs I wasn't crazy about before. Christy Altomare, playing Wendla, was the hardest not to compare to her OBC counterpart, Lea Michelle. She sang much more even and pronounced on her songs, so it sounded very different. But she had a beautiful voice and played the naive innocence of Wendla very well. Blake Bashoff (who I recognized as Carl (RIP) from LOST) was quirky and dramatic as Moritz, bringing lots of giggles from the audience. I especially enjoyed him in And Then There Were None and Don't Do Sadness. 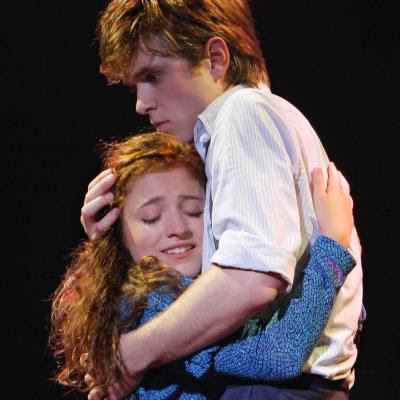 As for the rest of the cast, the standouts for me were Sarah Hunt (Martha), Steffi D (Ilse), and Andy Mientus and Ben Moss (Hanschen and Ernst, respectively). The latter two had the crowd in stitches during The Word of Your Body reprise.

I was also thoroughly amused watching the conductor/keyboardist. He was absolutely jamming. He probably does it in part because he has to play the piano and conduct the rest of the band at the same time, so it is a good way to keep the beat for everyone. But it was hysterical and brought a good energy to all the music. I found I looked at him often.

As for songs, I mentioned above that, after seeing the show in person, there are different songs that stand out than the ones I would have picked off the recording. The choreography, blocking, acting, and lighting that took place during some songs made them so much more entertaining to see in person. Examples of this are The Bitch of Living (full of energy), The Mirror-Blue Night (Riabko on that last note just killed me), and Totally F***ed (made me want to stand up and jump around). 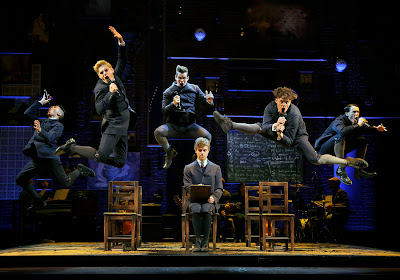 I won't say too much of the story in case someone wants to see it and I spoil it. But I left feeling like I had been wrung out like a rag. It is a stick-with-you kind of show. And it is not for everyone. Maybe one or two people in my family would enjoy it at all. I know for the LA production that there are still tickets available. The theater is large and wasn't sold out. Also, I think you can get same day Hot Tix through Center Theatre Group.

[Perhaps my sight should have a disclaimer that there aren't many shows I don't enjoy, and just the energy and experience of live theater always counts for something! Having said that, I think Spring Awakening is worthy of a great review.]
Posted by Linz McC at 6:52 PM

Oh wow, I'm so thrilled that you enjoyed "Spring Awakening" so much. Your review is making me very excited about seeing the tour next year.

I definitely agree with you about the choreography in "The Bitch of Living" and "Totally F***ed." It was so energetic, so electric. At times, I felt like I was watching some hot new band in club. And even though there were some predictable aspects to the plot, I was crying at the end.

When I saw it in New York, I thought, this is what it must have been like to see "Hair" on Broadway - it was so unlike anything I'd seen before on stage.

I sat near the back when I saw it, too, and I wish I'd been closer, like maybe on stage right next to John Gallagher Jr.!

I actually got tix to see this here and had to go out of town for work...but my friends HATED it! I saw the production on Broadway and loved it. I think if you're a fan of traditional music theatre, this might not be your cup of tea but I think its great. I have all the music on my ipod.