With only a slight sense of shame, I braved the crowds in Westwood last night for the LA Twilight premiere. While I heard that people spent a couple of nights camped out for great seats, I arrived after the mayhem started. So I can at least claim SOME sense of dignity. As a result, I missed seeing Taylor Lautner (Jacob Black) and Cam Gigandet (James). But there were no shortage of Twilight-star sightings. Here is who I managed to see:

I got some absolutely TERRIBLE quality photos of some of the stars (Rob Pattinson, Peter Facinelli and Jenny Garth, Nikki Reed), but they are proof I was there, at least... I am not posting any because they are terrible, so here is a professional one instead. 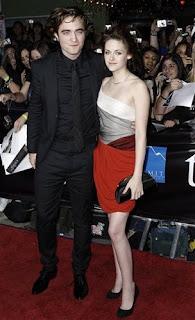 By time Rob Pattinson showed up, we just wanted a glimpse and then left because I was literally being climbed by 13 year old girls who were so short that they could see nothing. I was covered in sweat from being in a mosh pit of teens.

We hit up Corner Bakery, which tastily topped off the experience. However, I am not sure I need to do that again...
Posted by Linz McC at 11:02 AM