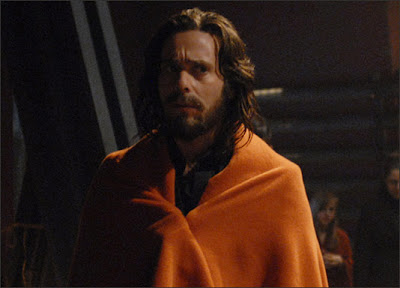 I just finished up the season premiere of Battlestar Galactica. I can't believe it has been more than a year since the last new episode aired. I kept pausing it and asking questions to remind myself what was going on at the end of last season. This post will be pretty spoilery for this episode. Don't read it if you didn't watch. Here are a few points I wanted to make.

- Kara. I just don't know what to think. I would say it is too obvious that she is a Cylon. Maybe she is a prophet or a god? But a Cylon? At this point, I say no. I get why everyone is leary of her, but I loved Lee's point when he said (not verbatim because I don't remember), "What if it had been my brother climbing out of a cockpit? What if he had been a Cylon all along? Does that change anything about how I feel about him?" 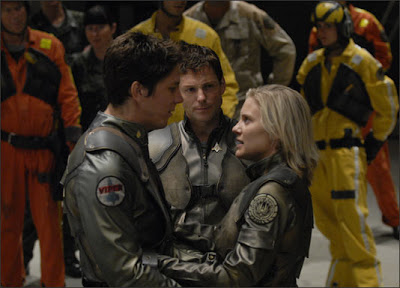 - The four "new" Cylons are clearly freaking out. Will they really kill themselves before they allow them selves to hurt any of the humans (or the whole fleet)? If they cared enough, they would kill themselves. But let's not forget that there is always the possibility of resurrection elsewhere. Killing themselves wouldn't accomplish as much as allowing themselves to be locked up. I have felt so upset about these four. Except for what's-her-name that worked for Roslin, I really love these guys and am disappointed at the prospect that they could become bad guys. Oh, and Anders better watch out. Starbuck is about to put a bullet through his skull...

- Is Baltar supposed to be Jesus now? Praying, sacrificing himself for someone else, the hair and beard, the outcast with the few devoted followers. Granted, Jesus wasn't a crazy loser like Baltar. I was really glad to see he cut his hair. I am both sickened by Baltar and completely intrigued. He is my favorite character. It would be interesting to see if he could redeem himself before the series ends.

This was an excellent episode to kick-start the season. TPTB of BSG never let me down. Of course, we didn't get any answers, but I watch Lost, so I am used to getting no answers. As long as the story is good along the way, I can handle that.

UPDATE: I just found this fun Top 43 Moments of BSG list. Check it out. There are some doozies!
Posted by Linz McC at 8:56 PM

I think the entire series has been loosely paralleled to the Bible. So I'm not surprised seeing Baltar's role as a preacher, and hell, what a resemblance to Jesus!