My thoughts on last night's episode of Battlestar Galactica: 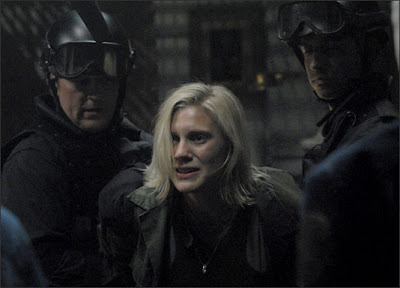 Roslin, Starbuck & Admiral Adama - Obviously, Kara was not going to shoot the President. Roslin, however did not feel the same about Kara. But is Adama right? Is it a miracle that she is there? Is he becoming a believer? All I know is Starbuck means business! And Adama figures a way to send her on the search for earth without risking the entire fleet. Give her a stinky sewage ship and a crew and send her off on her own.

The Cylons - It is a revolt! It seems the human-friendly (well, not exactly human-friendly, but smart!) Cylons have decided to stage a coups. Is this the first step toward human/Cylon peace? The three Cylons that are rebelling and taking hold of "free will" are also the three Cylons that have experienced love with a human (Six with Baltar, Sharon with Helo and Chief, Leoban with Starbuck on Caprica). So does their experience give them the leg up, or maybe even some special ability the others don't have. Would be interesting to see that it does.

The Four Revealed - Love that Tigh is taking charge and the answer is to infiltrate Baltar's harem of women. Tory actually falls for his shtick. Will the Cylons and Baltar unite due to the belief in a single God? 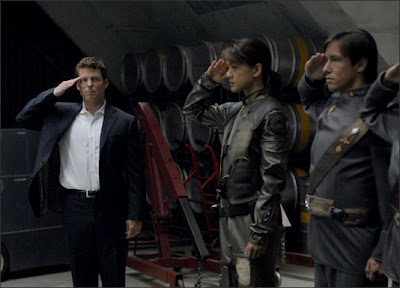 Goodbye, Apollo - If I didn't know better, I would say that this was the last episode Jamie Bamber would be in. Could it have been more of a goodbye episode? It was sweet, though. I liked the emotions of the goodbye with Kara, where he uttered those most important words: "I believe you." And I guess the divorce from D is final. However, what was with the very large neck-hole on his womanly v-neck shirt?
Posted by Linz McC at 1:34 PM