Thoughts on this week's Battlestar Galactica:

Lee - He didn't waste any time getting down and dirty now that he is a politician. Interesting how Zarek is going to use him against Roslin (or is he?). 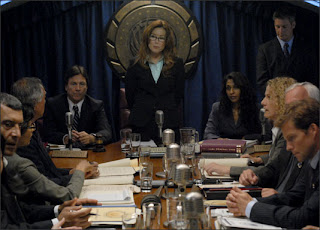 Cavil - Oh he is sneaky. How did old Six fall for that? I knew something fishy was up. He was way to agreeable to their plan. I have to say, it was a pretty smart move, but I was rooting for the "good" Cylons to figure a way out...

Callie - Well, Callie, wife of Cylon Tyrol, mother of hybrid Nicky, has lost it. Completely lost it. Not that I blame her, but to be prepared to kill herself and Nicky? I guess Ducky didn't get his wish... Of the Final Four revealed, I have been most offended at Tyrol being a Cylon, because of his relationship with Callie and the fact that he has a son. He better be pretty upset with the way this is turning out. 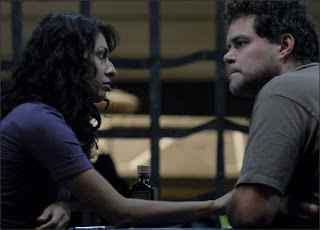 Tory - What is with her now? Is she embracing her Cylon-hood, or trying to escape it? Why has she decided to use her sexuality to manipulate everyone, human (Baltar) and Cylon (Tyrol) alike? Either way, she is really starting to act like a Cylon, and I mean the Cavil kind, not the Sixes!

The ending - I knew it was coming but I still didn't think she would really die! I thought it was very sad, and really sets some things in motion.

Sorry this is so poorly written. I was in a hurry. But I think I got all my thoughts across.
Posted by Linz McC at 2:47 PM