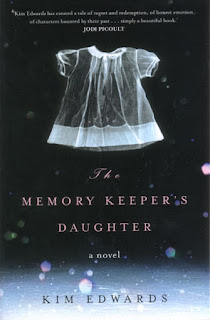 I finished up Kim Edwards' The Memory Keeper's Daughter this morning. It was a tough read. It wasn't slow or boring or anything like that. Just really hard subject matter, and it didn't really get easier as I progressed through the book. This book had been recommended to me from a couple of different people, so I wanted to give it a try. Emily told me she had thought of reading it, but the subject matter was a bit heavy for someone with a 6 month old. Let me go ahead and let you know. This book is DE. PRESS. ING. Especially if you have a child, have lost a child, have a child with Down syndrome. Here is why:

David Henry is a doctor who is forced to deliver his wife Norah's child in a snowstorm, with only his nurse Caroline to help out. Norah delivers a healthy baby boy, but then there is a surprise second baby, which Norah delivers while drugged up and passed out. This second child is a girl with Down syndrome. Dr. Henry gives the child to Caroline to take to a "home" for children like this, believing he is preventing Norah from dealing with great pain. He tells Norah that the second child had died. Caroline decides against leaving her at this "home" and takes her as her own instead. And that is only the very beginning. Dr. Henry's actions in regards to his daughter lead the characters down a painful and difficult path.

Norah deals with the loss of her child. Kim Edwards does an excellent job of portraying the massive pain and heartache that Norah feels due to this loss. As a result, it is taken out on her family, her marriage, and her own heart.

David deals with having lied to his wife about something so huge. There was never a chance to go back because he so fully committed to his lie. And as a result, his guilt led to a complete breakdown of all of his relationships.

Caroline deals with raising a child with disabilities in a time period where such child is considered useless. The things that people say to Caroline about her child (Phoebe) are so atrocious that I wonder how people would ever consider a child with disabilities to be lesser than someone else. It was heartbreaking, but Caroline fights back to get things for Phoebe that other children get automatically, such as education.

Paul, Norah & David's healthy-born son, deals with the knowledge that he is incomplete without his twin sister. He also has to find himself while watching his family fall apart.

The characters were really well-developed and Edwards certainly knew how to write the subject matter. But it was just a really hard and sad read. If you are up for that, this is a great book. But consider yourself forewarned!
Posted by Linz McC at 4:02 PM