OK, so I haven't blogged in a couple of weeks. I think I should be forgiven as I have been adjusting after a move to a different continent. :) But I plan to try to catch back up! Let's do a small catch up now! SUPER SPOILER ALERT!!!

LOST, "The Little Prince" - I don't even know what to say about Lost. I realize that a lot of fans are confused this season. I won't say there aren't confusing parts, but I am all about being confused. I still have full faith in the writers that things will be explained at a later date. Last night's episode was so amazing to me. I loved it. Sawyer got to see Kate again. While it hadn't exactly been addressed, we knew the time traveling crew was bound to show up at the time the Losties were on the beach. Sean guessed as soon as he saw the light. Creepy! But I love where this is going with Sawyer, and more character development. 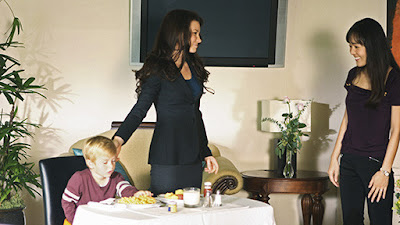 And then Jin. JIN JIN JIN JIN!! I knew he wasn't dead. I just knew it but I am glad to see he is alive and saved by a young pregnant Rousseau. While I guessed that Rousseau was in the boat as soon as I heard the french, I did not see it coming that Jin was on the floating piece of wood... 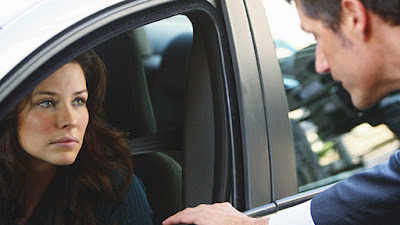 Jack & Kate are reunited. Ben has confessed to going after Aaron, but I am guessing it is just a ploy to get them back to the island. I had wondered if that blood sample stuff was Ben's doing. And then I suspected Sun. And then for a split second we thought it was Claire's mom. Jack almost spilled all the beans. Conveniently, all the O6, except Hurley, are sitting at the marina. I am really excited to see where this is going. Shew! This was a great episode, but more than that, I think it set us up for what this time travel stuff entails.

Battlestar Galactica - No matter what you might say about Battlestar Galactica, you can't say that they are afraid to go to dark places. The first two episodes of the season were probably the most depressing and hopeless of the series thus far. After discovering a destroyed and unlivable earth, the fleet is in chaos, chomping at the bit for new leadership and new hope. I have been frustrated with Gaeta, who still seems to be trying to make up for the fact that he worked for Baltar and the Cylons while on New Caprica. Yes, he was feeding information to the revolutionaries in the fleet, but still, he was working for them! And then he stabbed Balter with a pen. And, seriously, I think I prefer Baltar over Gaeta right now. I am sure he thinks he is doing the right thing, but I don't think aligning with Zarek and mutiny is the answer. In the meantime, we got down to business in the third episode, "The Oath." Our favorite Galactica crew is coming together to fight against the upheaval. I don't care if you are human or Cylon. You don't let someone kill Admiral Adama! And I love seeing Starbuck and Apollo in on the action. I am just WAITING for someone to break open that brig and then it is on. Gaeta and Zarek don't really have a chance. Looking forward to tomorrow's episode!

Chuck vs the Third Dimension - I didn't get to watch this with a pair of 3D glasses, but I found it enjoyable nonetheless. Plus, who isn't glad our favorite loveable nerd is back? It was too long of a break.

I have a special interest in this episode, as I worked as an extra in several of the scenes. It was only my second or third gig and I was SO pumped when I booked it. I worked it for two days and the second day I was there for like 13 hours and was completely exhausted and sweaty mess by the end, but it was so worth it! On top of that, I made some fun friends in the process. 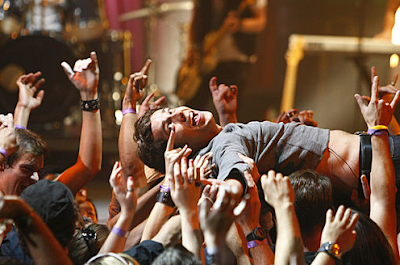 When I got to set, I didn't know that Tony Hale (Emmett) or Dominic Monaghan (Tyler Martin) would be there. I had heard Hale had joined the cast but had forgotten, and at the time, he had not appeared in any televised episodes. I am a big Arrested Development fan, and it was fun to see Buster in person. And then I saw Dominic Monaghan and was ecstatic. I love him as Charlie in Lost (RIP) and it was a real hoot. In addition, I saw Chuck, Sarah, Casey, and most of the Buy More staff. As a HUGE Chuck fan, this was all a real treat. 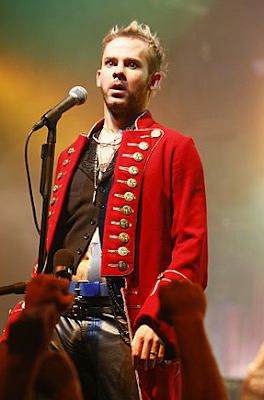 Dom Monaghan was really hilarious in person, acting quite silly when in character and doing a small bit of ad-libbing each time. I think comedy suits him. There was also a perfectly timed rendition of "You All Everybody" by Zach Levi. Just love him all the more for being a LOST fan!

Well, those are the only shows I am all caught up with.
Posted by Linz McC at 8:29 PM

I'm totally with you re: LOST. Yes, I like to dissect it and figure it out, but I'm pretty much just enjoying the ride.

Who knows where to download XRumer 5.0 Palladium?
Help, please. All recommend this program to effectively advertise on the Internet, this is the best program!