Just a warning: I expect this post to be very scatter-brained, and it probably won't make a lot of sense. 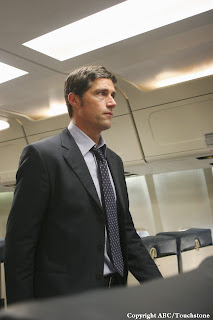 I managed to watch about 30 seconds of this episode before I forced myself to turn it off and wait for my husband. He would never forgive me for watching it without him. But, needless to say, I was freaking out after seeing Jack wake up in a jungle. So I was so upset when Sean got off work late, didn't get home till late, and then we had technical problems and had to wait till 11 pm to get it watched. But it was well worth the wait.

Here are some of my thoughts and questions from this episode. (I watched it twice so I could be sure I didn't miss anything, but I am sure I did, nonetheless)

- We already know that Sayid and Hurley have no interest in being involved with Ben in this attempt to return to the island (although, I think both of them might feel somewhat compelled to return without his help). So who (or what) got to them to make them get there? I am guessing the same person got to Kate because I can't imagine anything that would make her give up Aaron (which seems to be the case??) and follow Jack to the island. And, let's face it: It isn't Ben. He was too busy taking care of his "promise" to deal with getting them all on board. And there is also the fact that Hurley didn't know he would be there.

- Did anyone else find the sudden rekindling of the Jack/Kate romance quite desperate. Both for the two of them, and for the story? I didn't think it fit. 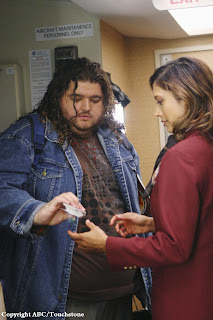 - Two questions about Hurley. Why the guitar (It clearly has some meaning regarding Charlie, but I don't know what it is. Oh wait! Maybe Charlie visited him and that is what made him rush to the airport?)? The second question is about the seats he bought up. The flight is quite packed back in coach, so I am just guessing that he bought up all the remaining seats on the flight, so no more people would be allowed on. I was just a little confused on that. I love that he wanted to keep those people from getting on the plane.

- Speaking of Ben's promise was this him fulfilling (or trying to fulfill) his promise to kill Penny? He was at a marina. But who beat the crap out of him? I am hoping it was Desmond or maybe Penny herself. Did you notice not one person was curious about his beaten state when he got on the plane, not even his new best friend Jack?

- And as for Jack & Ben, I think their relationship is funny. Why would Jack as Ben, of all people, if he was responsible for Locke's death? And why does Ben tell him what he wants to hear (kind of fatherly, actually)? Also, I was amused that Ben seems quite jealous of the one-on-one time that Jack had with Mrs. Hawking.

- Of course, then Jack opens this suicide note and it is a letter of blame to Jack. Come on, Locke. That was just mean! But I am guessing Locke either killed himself because he knew he had to, or he had a hand in it... Did John even write that letter to Jack? Or is this something Ben is involved in. He has his hand in everything else.

- It is interesting that John's body will substitute for Christian's on the plane. It seems that Jack is trying desperately to embrace all the crazy talk (and not be a Doubting Thomas, which as an interesting analogy that Ben used for Jack not believing) 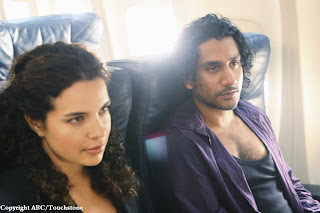 - Sayid has a police escort. What happened here and how did he manage to board this particular flight? And why did Sayid where another one of those low-cut black tank top/undershirts to the island? To recreate his first trip? I think the island would have found him anyway...

- The Losties returning to the island didn't crash this time, but flashed. Right into the time period where Jin is. This seems a little too lucky, so I am guessing that they are subject to the same time-jumps as those that are left on the island.

- But where are the other people from the plane? Sayid? Sun? Frank? The new guy and girl that were in first class? What happened there?

Ben: "Who cares?", when Jack asks what will happen to all the other passengers on the plane

And now, next week, when all I want is to see what happens next, we get the Locke episode. You know, the one we have been waiting for. The one that explains everything he did after he left the island. The highly anticipated explanation. But all I want is to see what is happening on the island now that the O6 are back...
Posted by Linz McC at 7:34 PM

Good notes on the episode. We just watched it last night. One question: how did Hurley get away from the police? Wasn't he being accused of murdering those guys? Am I forgetting something...we don't usually watch them twice:). Any help with this would be appreciated.

Hi Cass- Are you guys enjoying this season as much as we are?? I know in a previous episode, Ben's lawyer told him that they were going to have to drop the charges he was being held for (and confessed to) because they had proof he didn't do it. But as far as I know, he still hadn't gotten out of jail. I am pretty sure we are going to get some new flashbacks to show us how Hurley got out of jail and made it to the plane (with a guitar), how Sayid got there with a police escort, and how Kate got there sans Aaron. Should be interesting!