OK, I realize it is really late to be posting something about my weekend. But I have been busy and I am just getting this posted on a Wednesday. 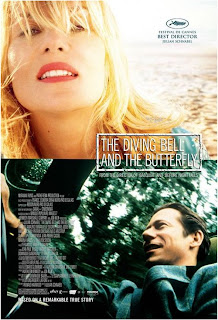 The Diving Bell and the Butterfly - I had heard of this movie and was curious. However, it is in French and has subtitles, and I was having a hard time selling my husband on it. I added it to my movie queue anyway, and just watched it by myself. I am very glad I did. I was impressed with both the way this film was shot and edited, as well as the tragic but inspiring story that it portrays. In case you aren't familiar, this is the true story of a successful magazine editor who is completely paralyzed in a car accident. The only part of his body that works (besides his brain) is one eye. Through this eye he not only learns to communicate with his family and caretakers, but decides to write a book, which then gets published. This was a touching story and also greatly intriguing. Check it out. 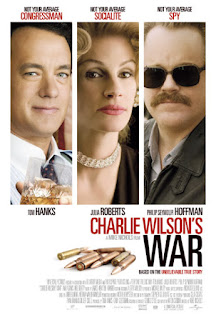 Charlie Wilson's War - I didn't expect to enjoy this movie. Hollywood always makes bold and heavy political statements with its movies, especially ones that are about politicians. With the heavy stuff we have dealt with lately in this country (I write this while watching the 3rd presidential debate), I just wasn't in the mood. But I was pleasantly surprised that I didn't feel that there was an agenda with this one. Just a story that should be told. A man who wasn't always the most moral finds a cause and invests years of his life (along with several other politicians and citizens and a billion dollars) for what he feels is right. I really enjoyed it. Did I mention I will see pretty much anything that Phillip Seymour Hoffman is in? 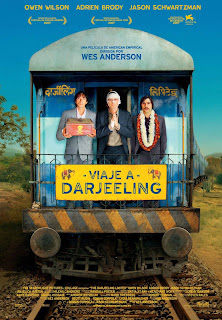 The Darjeeling Limited - Wes Anderson does not automatically mean an enjoyable movie for me. I like Rushmore and The Royal Tenenbaums. I didn't prefer The Life Aquatic with Steve Zissou. The Darjeeling Limited falls on the side of The Royal Tenenbaums. Anderson writes some very strange relationships, especially among families. Darjeeling tells the story of 3 brothers who reunite in India after a year of not speaking. They meet some odd characters and experience some strange events, both funny and very sad. Anderson favorites Owen Wilson and Jason Schwartzman join Adrien Brody. The three were good together and just goofy enough to pull off this odd plot. I wouldn't buy this DVD or anything, but I might watch it again if it were on TV. And I enjoyed it especially since I have a trip to India coming up myself!
Posted by Linz McC at 6:52 PM

I actually haven't seen any of those movies. I got a screener for Diving Bell when it came out but of course it didn't work. And I really want to see Charlie Wilson too. Not sure about the Wes Anderson film. But I may check it out too!

I've added The Darjeeling Limited to my queue. However, I am a bit skeptical since I didn't care for The Royal Tenenbaums or The Life Aquatic. I did like Rushmore, though.

I loved The Life Aquatic. If you watch the scene where they're storming the island to rescue one of their friends, it just screams "Hey, let's make a movie!"

But my favorite Wes Anderson is still Rushmore.