Chuck versus the Cougars

The name might imply that Chuck is having a relationship with some much older women (didn't we see that a couple of weeks ago with Julie Cooper-Nichol?), but in reality the Cougars are the mascot from Sarah's high school in San Diego. In this episode, the audience, but more importantly Chuck, gets a glimpse into the elusive past of Sarah Walker. Turns out Sarah was not the cool girl in high school that she is now. In fact, her name was Jenny Burton and she had braces, bad skin, and bad hair (actually, a pretty bad wig, if you ask me). And still unbeknownst to Chuck, her father was arrested in front of her eyes and taken to prison.

The most important aspect of this episode is the reminder that Chuck really knows nothing about Sarah's past and how she came to be who she is. But that matters not to Chuckles (as Anna calls him) since he feels he knows her very well now, and that is enough. 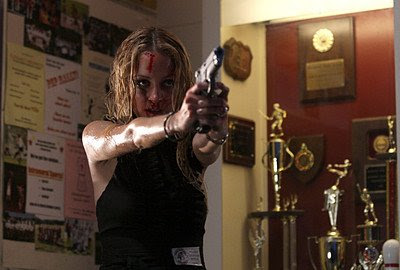 In other news, in case you possibly missed it, Nicole Richie guested in this episode as the popular high school cheerleader AKA Jenny Burton's nemesis, as well as an associate of the Russian mob. Cue wet girl fight. And Jenny kicks her butt.

With all the attention paid to Nicole Richie (who did a good job, I might add), it was regrettably not mentioned ANYWHERE that Ben Savage (Cory Matthews from Boy Meets World) also guest stars in this episode. It was great to see him as I had wondered what he was up to lately. And he was the lovable nerd, who found a hero in Chuck. 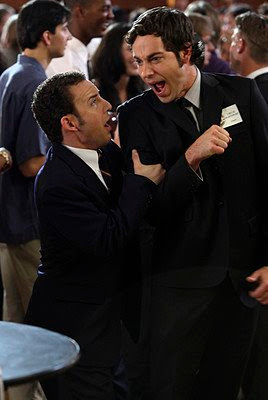 Casey allows Chuck to take a bunch of the credit as he is posing as Special Agent Charles Carmichael to Savage's nerdy genius. It wasn't required of Casey to make him look like the hero, and it was rather endearing.

In the side-plot, the Buy More is left in Lester's charge, and, with much ado, he resigns his post. It was the least interesting part of the episode.

My favorite part of this episode was the mention of the DJ at the high school reunion, where we look up to find that John Casey is up in the DJ booth, throwing his arms side to side, jamming with the crowd. Classic!
Posted by Linz McC at 9:23 PM

This episode scores high because it gave us a glimpse into Sarah’s past.

My favorite parts of the episode had to be Casey as the reunion party DJ. Can I say how much I love Adam Baldwin?

I’m not a Nicole Richie fan, but she was perfectly cast as the bitchy cheerleader. How fitting that her character married the geek – Mark Ratner (Ben Savage) for his money only to find out he had no ambition?

And lastly I loved that the beaten up, wet Sarah beats out the cheerleader for Reunion Queen. Is that ever band geek’s fantasy?

I agree about Nicole Richie. I expected her to be a bad actor, and she wasn't. I thought she did pretty well.

I like how no one even noticed that Sarah was wet, barefoot, and beat up except Chuck. Hilarious.

Oh, I forgot to mention, one of my other favorite things about this episode: all the 1998 music! It carried me back to my freshman year of college. Fun times!

In my, and all my friends who have seen the show's, opinion Chuck is a fantastic program. Every episode is fun, it never gets boring, there are a bunch of unbelievably hot girls, and none of us can wait for next episode..TRuly admirable and entertaining show!! Catch all eps Download Chuck here..