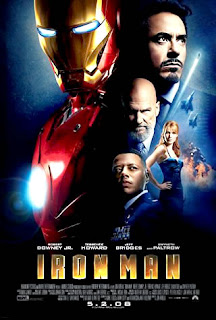 I am generally a fan of the comic book/superhero movies. I have managed to skip a few (Fantastic Four and the first Hulk come to mind), but of course this summer has produced a number of box office successes in the form of superheroes straight from the comics. With Iron Man, I have now seen two of the three on my list (I've seen The Dark Knight but not The Incredible Hulk (yet)).

I had high expectations from Iron Man as it was a critical success (critics gave it a 93% on the rottontomatoes.com site, made a large amount of money worldwide (so far about $574 million), and had been recommended by a handful of people I associate with (see Emily's review here). I think I would have enjoyed it more had I seen it in the theater instead of watching it at home on my pitiful excuse for a television. But I still enjoyed it greatly.

First off, I realize it is "beating a dead horse" or "preaching to the choir" or one of those fun cliches, but let me reiterate what I have said a couple of other times in my blog posts: I really love Robert Downey, Jr. (See this, this or this to see my previous RDJ accolades). He is the opposite of who I would have expected to be cast as Tony Stark. And it turned out to be a casting move (and points out how I should never be allowed to cast anything). I also enjoyed Gwyneth Paltrow playing a role a little different than her usual (she has been off my radar lately, though) and Terrence Howard.

What is it with Jeff Bridges that he just seems to annoy me more than anything else. I knew immediately his character was the "bad guy" and wasn't very interested in him. He is just a turn-off to me when I find out he is in a film I was looking forward to. I didn't think he took away from anything in Iron Man, but I would have liked to see someone else with the role and what they could do with it.

The script, execution of the story and CGI were all outstanding. Jon Favreau did an excellent job adapting this for a feature length action movie and directing it. The effects weren't cheesy and were rather realistic-looking.

Unless you just hate action and/or superhero movies, I recommend this to anyone now that it is available for rental.

Next on the list: Before the Devil Knows You're Dead
Posted by Linz McC at 10:02 PM