Last night, Vance and I made a trip to the Ahmanson Theatre to see 9 to 5 the Musical (music & lyrics by Dolly Parton and book by Patricia Resnick) in its pre-Broadway run. Since he is busy going to the set of The Office today (lucky!), I am going to beat him to the punch with my review! Here it is: 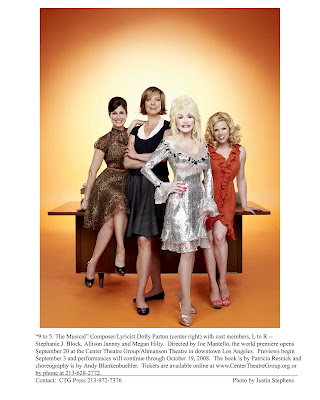 Overview: If you haven't seen the 1980 film that inspired this stage show, the story is this: three women who are mistreated by their mean-spirited, misogynistic, sexual-harassing boss band together to take action (action that includes kidnapping and holding him prisoner). 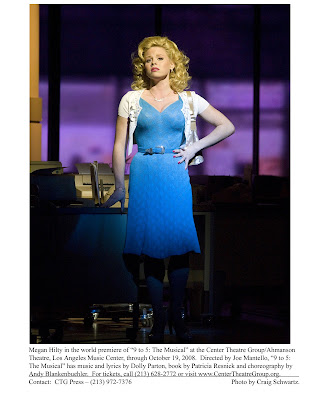 The Cast: Megan Hilty was hysterical as the Texas-bred "Backwoods Barbie" Doralee (nailing the part originally played by Dolly Parton). Her southern sass alone brought on many bursts of applause. I give her extra credit for fitting into those outfits and looking so good in them! Stephanie J. Block played shy-then-independent Judy. Her own surprise as she grows and has new experiences (smoking pot!?!) made her so endearing. And then her powerhouse voice was put to excellent use in "Get Out and Stay Out" (I bet she was an amazing Elphaba). Allison Janney was very likable as widowed mom and potential manager Violet. She is the elder of the three and seems to be the leader, and at times, mother to the other girls, as well. She doesn't have a booming Broadway voice like the other two girls, but it worked with what she had. The best part of the show are these women, and the performances together, and the chemistry they share. Marc Kudisch was slimy and dirty and sleazy as Hart, and I wasn't completely disgusted with him... I know, I am a poor excuse for a woman! But I could kind of see why office manager Roz was so in love with him. 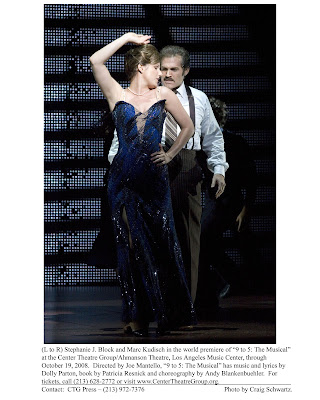 The core cast was outstanding and the ensemble was great. Other cast members who stood out for me were Kathy Fitzgerald as Roz (the rule-following office manager pining away for Hart) and Andy Karl (the cougar-hunting accountant). Ensemble pieces were so much fun to watch, mainly due to excellent choreography from Andy Blankenbuehler (In the Heights) and really fun office sets, circa 1979.

One can not forget to mention the person that completely made this show what it is: Dolly Parton. I love Dolly and her music is just so catchy. She gives this show a feel it wouldn't have if someone else had written the music. The song 9 to 5 is so catchy, and from the opening of the show when that piano beat starts playing, the audience is just sucked right in! The trio of songs inspired by the marijuana-muddled dreams of Judy are a real crack-up. 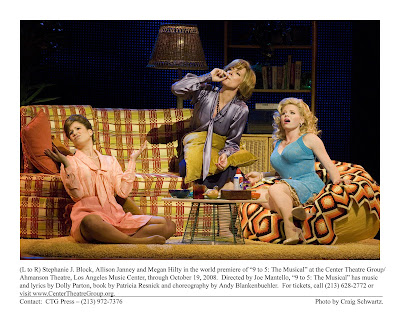 There wasn't a whole lot I didn't enjoy about this show. Well, nothing really. I think the best description I can give it is this: It was a hoot! If you can't check it out at the Ahmanson in Los Angeles before October 19, go see it when it opens on Broadway next Spring!
Posted by Linz McC at 7:49 AM

Wow, great review. I'm glad the three women have such good chemistry. I love it when the tunes are catchy and the choreography is amazing to watch. And I loved the choreography in In the Heights, too. It sounds like a ton of fun. And you and Vance got to see it first!

Now that I have had a couple of days to process it, I can still say I really enjoyed the show (the shiny new has warn off a little). My biggest complaint is that I didn't think Marc Kudisch was given much to work with by way of songs. None of his numbers blew me away, and I don't think it was lack of quality performance on his part.

Also, I haven't seen the original movie in so long, I couldn't compare it to those performances. I wonder how it would stand up? I should watch the movie and see what I think.

I saw opening night of this (Complete with technical glitches and Dolly herself singing 9 to 5 while they fixed it!) It was entertaning but I wished the story made more sense. The whole love connection seemed so tacked on (and unnecessary!) And the music was fairly unmemorable (save the ttile number. I wasn't humming any of the songs when I left. I'll probably still catch it on Broadway though. Great review!

Hollie - While I am not sorry to have missed the technical glitches (wouldn't that have messed up the continuity of the show?), I am very jealous you saw (and heard!) Dolly.

I agree with you that the love story was a bit unnecessary and rather forced. I guess the writers just felt like they needed a love story somewhere in there.

There were 3 or 4 songs that stuck with me, and while that isn't very many, seems about average after I have only seen them performed once.

I have been singing the title song for 3 days now. I should just download Dolly's version and be done with it.

I wonder what changes they would make (if any) before it hits Broadway in 6 months.