So You Think You Can Dance Tour - Los Angeles 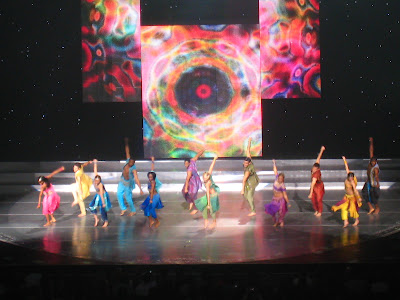 Last night was the Los Angeles stop on the SYTYCD tour, and I was so happy to see our Season 4 Top 10 (plus a few). On hand to dance were

I think half of the couples dances were Josh & Katee. I can't comprehend how they had the stamina to keep it up. They did tons of dances together, each had a solo, they had dances in other pairings, and several group dances. Shew!

The tour really shows who is good with the audience, who is a performer versus a dancer. Most of the boys came off better than the girls in the personality department (Twitch, Thayne, Gev, and Will were all good when they had to MC between dances (usually with dorky comedy thrown in)).

Solos that stood out:
Gev (so good, and so adorable)
Twitch (feeling the beat myself made all the difference for me with his solo)
Katee (love emotion that shows through)
Will (such a pretty body, but more as a work of art)

One of my all-time favorite contestants PASHA (along with Anya) made a guest appearance to introduce the dance they choreographed for Courtney & Gev. I was so happy to see them. Also in the house were Tyce, Tabitha & Napoleon, and Nigel, along with several former dancers, who I assume are all LA-based now (but I didn't see any of them...).

I realized that the last three seasons have given me some great music, that I have subsequently downloaded. I can't remember any from season 1, but season 2 was Rama Lama by Roisin Murphy, season 3 was The Moment I Said It by Imogen Heap (already had this one but my love grew after seeing the dance), and season 4 is Hometown Glory by Adele. Love a good soulful piano ballad!

Sorry for all my scatterbrained thoughts. It was a long show and quite jam-packed. I can't remember everything! It was a lot of fun, though. I did forget my camera but I will try to steal some from Vance once he posts them.
Posted by Linz McC at 9:51 PM