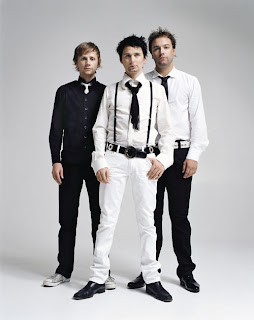 I have posted about Muse before. They are one of my all-time favorite bands. I saw them on the cover of some magazine recently and it said they were the biggest band America had never heard of. They are huge EVERYWHERE else but here. But they certainly do have an American fan-base. Helps that they made an appearance on the Twilight soundtrack (as well as the upcoming New Moon soundtrack). And, at least in my town, they are getting some good air play with songs from their latest album, The Resistance.

I was waiting anxiously for this album to come out. Their last album Black Holes and Revelations (the tour for which I attended), was beyond amazing. In fact, they have yet to put out an album I don't like. So I purchased The Resistance the very morning it came out via Amazon's MP3 Downloader (cheaper than iTunes!). And now here is my opinion of some of the songs on the album, as well as youtube videos of each song.

Uprising was the band's first single and it has quickly gotten a lot of radio play. It has a classic Muse sound and a very heavy beat that makes you want to stomp your feet. They performed this on the 2009 MTV Video Music Awards, their first live US televised performance.

Since I am still getting used to this album, when this song comes up on my iTunes I always think it is Britney Spears for a sec. Yeah, that is really sad, but once the song starts, I think this song is really radio friendly and I always find myself singing along.

For some reason, the opening chords of this song remind me of John Lennon's "Imagine" (don't know why because they really don't sound alike at all...) but I am quickly reminded it is not. In fact it goes very quickly into a Queen almost shout that drowns that out. With this song, Muse continues to make political and social commentaries via their music.

Really the only slow song on the album. I can't resist singing along on this one but I don't know the words so I just sing the wrong ones (which is normal for me anyway).

This song will appear on The Twilight Saga: New Moon soundtrack. Well, some form of it because they have been asked to re-record it as a soundtrack exclusive track. I love the almost campy sound of this song. And, as I have said before, Matt Bellamy can sing to me in French any time he wants.


If a major world-dominating rock band has the balls to put a symphony on their album (and three of the 11 songs, no less), then they get credit from me. On top of the fact that I love this side of the band and the fact a song can seamlessly go from heavy rock to a solo piano performance within seconds. See Butterflies and Hurricanes as an example.

Overall, I really like The Resistance. In my opinion, their sound is a little more mainstream on most of the songs, possibly an attempt to get more American air play. Seems to be working so far. I would have liked a couple more songs on the album, but I will live. So now maybe you have given the songs a listen, or not, but if you are even a little bit a fan of Muse, get this album.
Posted by Linz McC at 2:27 PM