I have recently been inspired to put together a list of my favorite current and recent television characters. I am allowing recent ones because a few of these are a couple of years old and still deserve to be discussed. Maybe after this I will try another "favorites" list because it is fun. Let's get started: 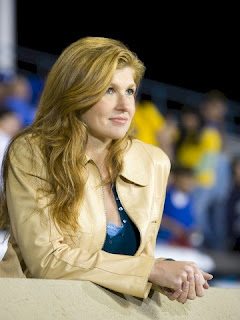 Tami Taylor, Friday Night Lights - I loved her from the moment she came on screen. She tells it like it is and it gets her places (she went from a stay-at-home-mom to high school principal in a couple of years, by way of school counselor and volleyball coach). She loves her husband and girls, but also really cares about her students and invests herself in them. I absolutely adore how she stands up for herself and others (when she tells off the college football recruiter in the grocery store when he is harassing Corinna Williams), and the things she says that "sound" nice but are actually quite rude, very often to Buddy Garrity. Plus, Connie Britton played the emotional mother of a newborn excellently. 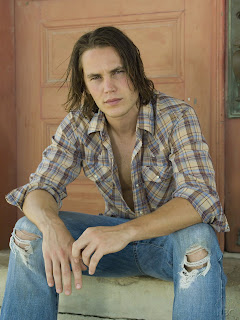 Tim Riggins, Friday Night Lights - I couldn't resist a second FNL character on my list. And he is the complete opposite of Tami Taylor. I didn't like Tim all that much during the first season. He seemed like quite a loser, and not too lovable. He grew on me a lot and after re-watching seasons one and two, and getting part-way through season 3, I just love him. You can't help but feeling "poor Tim" just about every other episode. So much of his issues can be blamed on his situation, mainly the fact that he was abandoned by his father and raised by his irresponsible (but well-meaning) brother Billy. It also helps that Taylor Kitsch is just really pretty to look at. 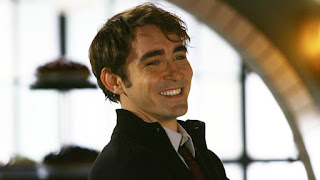 Ned, Pushing Daisies - Like I need another reason to wax poetic about Lee Pace. Sigh. But he plays Ned so sweetly and innocently. And when he is upset (whether it is about his father or Chuck or something else), he seems to play it like a 10 year old with pouting and huffing and puffing. Or a puppy dog, but I hate to mix my comparisons. There is just something so dreamy about Lee Pace and so, therefore, about Ned. I will miss him when he is not on my TV every week. 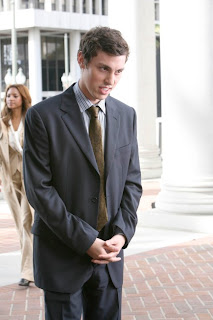 Dr. Lance Sweets, Bones - I love the dynamic that Dr. Sweets adds to the Booth/Brennan relationship, along with all the other relationships in the Jeffersonian. John Francis Daley plays this character somewhat naive, slightly annoying, and a tad socially awkward. And I think it is perfect. The writers usually have to create (sometimes force, but I am not complaining) specific story lines for Sweets to be involved with the others. I also find it amusing how Booth & Bones will sit in his office and say nothing, seemingly lacking any respect for him whatsoever, but he is slowly becoming the go-to guy for everyone's problems. 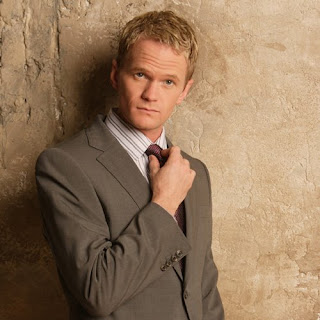 Barney Stinson, How I Met Your Mother - Neil Patrick Harris was nominated yesterday for a Golden Globe for his portrayal as Barney. And while I don't think he will ever walk away with the statue, it isn't because he doesn't deserve it. It is because the voters are idiots. I don't know anyone who watches HIMYM that doesn't think that Barney is far and away the most entertaining character on the show. Whether he is suiting up, hooking up, wingmanning it up (just an excuse to continue with the use of "up"), he makes me laugh. And then that he can have serious moments is nice, but, fortunately, not lasting. It is a relief the writers haven't had him constantly pining for Robin this season, and instead have kept him the same lovable womanizing narcissistic jerk. 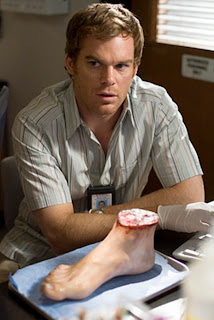 Dexter Morgan, Dexter - I won't get to watch season 3 of Dexter until it comes out on DVD later this year, so don't spoil anything for me! I wouldn't have thought the writers could make season 2 as good as season 1, but I was pleasantly surprised. In fact, they just might have made it better. Michael C. Hall plays the heck out of this character. It feels wrong to be rooting for a serial killer, but the fact that Hall and the writers can make me do that means he deserves to be on my list. Plus, he isn't too shabby to look at, especially in his "killing" clothes (snug thermal tops and cargo pants). 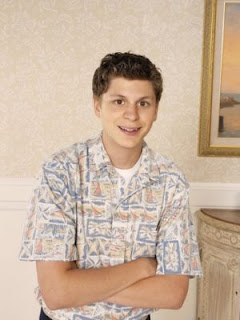 George Michael Bluth, Arrested Development - Darn that Michael Cera, he had to go off and find success in movies so that Arrested Development, The Movie won't really feel right. I will seriously be disappointed if George Michael isn't in the movie version, whenever it finally happens. But that is because his sweet, innocent, dorky, family-loving, Maeby-lusting self is my favorite character on the show (but it was a rather close four-way race). And let's face it. If Michael Cera hadn't had AD as a major spring board, we wouldn't be seeing him in movies much. He pretty much plays a version of George Michael on everything anyway. And he gets the distinction of being the character that says my favorite line from the whole series (also a close race, between about 1000 different quotes): "What a fun sexy time for you." 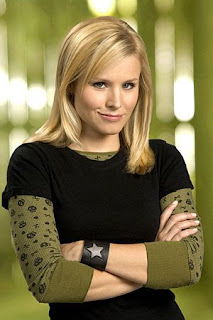 Veronica Mars, Veronica Mars - I originally missed the boat on this series. And if you didn't watch it, it seemed like it was probably some kind of cheesy Nancy Drew show on the WB. And I knew a lot of people who loved it fanatically. So I finally gave it a shot this last summer. My preconceptions were all wrong. It was extremely well-written and acted. Kristin Bell played the snarky Veronica to perfection. She had amazing one-liners and at times her vulnerabilities and fears were heartbreaking. It kills me when she is holding a gun to Beaver and says that line, "He killed my father!" 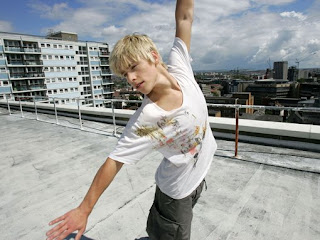 Maxxie, Skins - Skins is a BBC show that has been showing on BBC America recently. It puts other teen dramas like Gossip Girl and 90210 to shame. Maxxie (played by Mitch Hewer) is the least obnoxious to me of all the characters. What really makes me love him so much is how he helped Tony post-accident at the beginning of season 2 when no other friends (mainly Tony & Michelle) were around to help out. Also, he sings, he dances, he acts in school theater, he's adorable, he even has his own stalker. What isn't there to love? 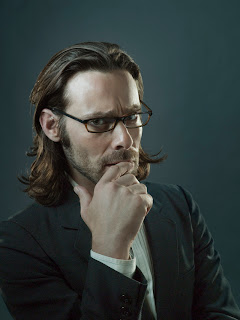 Gaius Baltar, Battlestar Galactica - I don't know what my obsession with Baltar is. I just have one, OK? The fact that James Callis can make me despise this character so much and still care about him tells you how great of an actor his. I wish any of our great BSG actors could get some real recognition from the Emmys, but Callis is one that really seems robbed for being overlooked. His turn this last season as a philosophical/religious leader took him in a new direction, but the same sleazy insecure guy was underneath. 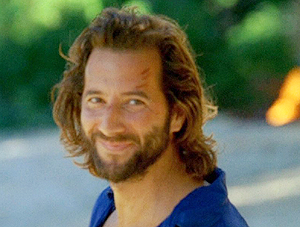 Desmond Hume, Lost - Being that I have recently mentioned that the Lost episode "The Constant" was my favorite TV episode of the year, it would probably come as no surprise that Desmond is my favorite character on the show. His story is still so much a mystery, so that is part of the intrigue, but I really enjoy the Penny/Desmond love story. I am also relieved that Desmond will continue to be part of the story and that we got some good Des/Penny interaction this season.
Posted by Linz McC at 11:47 AM

Unfortunately I haven't watched those listed on your fave list. But I have mine too. Perhaps the most memorable is Richard Winters from Band of Brothers. He displayed maturity and natural leadership. Then Capt. Jean-Luc Picard from Star Trek TNG, a similar leader character with great cultural interest. Ian McShane's Al Swearengen swore a lot in Deadwood. But that's what made him a charming yet brutal and funny character as well as pitiable. Newer series hardly impressed me. Only William Petersen's Gil Grissom deserved the mention. A leader and fatherly figure to the team, it was regrettable that he decided to quit the series after 9 seasons. Now I'm not a leader-role fanatics. It's just happened that the above actors were able to fit perfectly to the role. As if they were not acting. Another oldie was Jim Profit, played by Adrian Pasdar. A cunning and ruthless corporate employee that would do anything to reach the top. Perhaps a bit above Dexter, but this one damaged people's lives for power.
No actress from western series, though. But recent exposure to Japanese dramas made Matsushima Nanako as my favorite actress. Her role as Maeda Matsu so far unrivaled by anyone else. I believe she managed to utilize her acting rather than the script to perfectly played the role. Just a gaze from her and the men would yield. I think you should check out Toshiie and Matsu sometimes.

E.F., it's been a while. You bring up some excellent characters to add to the list. I adore Richard Winters from Band of Brothers. Damian Lewis was amazing in that role, but the real-life Dick Winters is to thank for being such an interesting and TV-worthy individual.

I must say I have never watched Star Trek TNG or CSI so I can't comment on those.

As for Al Swearengen, I can't say I loved him because I despised him so much. But that was because Ian McShane played him so well and he was written so well. He would do great on a Fave Villains list which I would love to write later on.

I am not familiar with Matsushima Nanako but I will have to see if I can find out what you mean. I hadn't realized that of my whole list, only 2 were female.

A great actor/actress can be considered successful when he/she managed to believe the audience that he/she wasn't actually acting. Yeah, Al Swearangen was a despicable character, but that feeling towards the character rather justify his success. Damian Lewis indeed managed to create that sense of leadership. I couldn't help to respect character despite whether everything was true or skewed (of which I don't care). Yeah, been awhile for quite some time, indulging myself in gaming and watching long Japanese series (historical ones).Glad to be able to post again. ^_^

I've been catching up with Britannia High and I never realized Mitch Hewer looked like THAT in Skins. Man, I really need to catch up with that show as well.