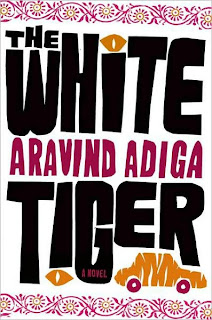 Reading books that take place in India is certainly giving me some insight. However, I am not sure The White Tiger, while entertaining and educating, does much to prepare me for my trip. The reason is that it is about the castes, from which the poor can't really escape. It is a very interesting commentary on what it takes for a servant from a very poor family to rise up and find financial success and freedom.

The White Tiger (aka Balram Halwai) is so named because he is the type that comes along once in a lifetime. His story is presented via letters he writes to the President of China over the course of a week. He writes these letters to prepare the president for a trip to India, and to tell him how things really are.

Balram is a driver for a wealthy businessman, whose main job is bribing city and country officials. He reveals early in his letters that he is currently a successful Indian entrepreneur and that he progressed so far through committing murder and theft. The reader waits through the story to find out how the murder comes to be, and what steps lead Balram to such an act. He points out that the caste system is what he calls a Rooster Coop, meaning that the roosters could easily fly away instead of being killed, but they just stand and wait their turn. And the Indian servants just take all the poor treatment, poor pay, and complete disrespect without a word. Balram is so different from others because he decides not to settle for the status quo.

Unfortunately, I don't feel like Adiga made Balram very appealing as a protagonist. And his boss Ashok is not so horrible as the antagonist (aside from one really horrible thing he does to Balram). So I didn't necessarily find myself rooting for Balram. But the story is more just a commentary on the status of India, the caste system, the mistreatment of people, the corruption of the government, etc. And it was really interesting to read.

From reading other reviews, I am not sure I loved this as much as other readers did. Maybe I am not the target audience. But it was an enjoyable read, nonetheless.
Posted by Linz McC at 6:07 PM

Thanks, Stella! I have added it to my list. I have just started A Son of the Circus by John Irving, which takes place in Bombay.

Ooohh--Son of the Circus is a good one! I love John Irving. You'll enjoy it...