My thoughts on 'The Runaways' 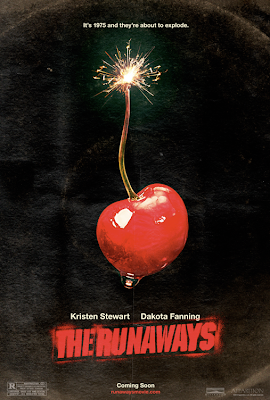 [Just realized I should add a SPOILER ALERT!]

Last night I had the opportunity to see an advanced screening of The Runaways, a biopic about the 70s girl rock band.  I have read and heard SO much about the film, including reviews, interviews with the cast and members of the band, and photos and clips from the movie.  At first it didn't exactly appeal to me. I wasn't even born when The Runaways formed and I hadn't heard any of their songs.  I also don't get into the sex, drugs and rock & roll rock star biopics.  However, once clips of the film came out, my interest was piqued, if nothing else I wanted to see these teen actors take on this kind of role.  So click on for my thoughts...

Like I said, this type of story doesn't usually appeal to me. Add to it the very indie feel of the film, and I wasn't crazy about it.  I didn't really feel like this was a new story except for the fact that it was the first rock band that featured all female members.  You still had the "start from nothing, start to get big, drug-induced ecstasy, hate on the over-publicized hot lead singer, infighting, band breaks up, members make up later in life" story that seems so common.  Actually, being a rock star is just cliche, isn't it? So you can't blame The Runaways girls for falling into that pattern.

Let's talk about the actors' performances: 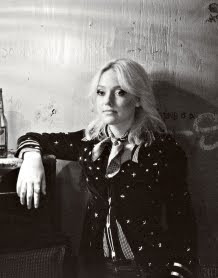 Dakota Fanning as Cherie Curry.  This was a hard performance to watch because I kept thinking in my head that Dakota is only 15!  But then I realized Cherie was only 15, too.  So it made it disturbingly fitting.  Dakota was great in this role.  How terrifying for her to take this on, but I firmly believe that she can pretty much act any role ever and pull it off beautifully.  Be prepared to watch Dakota snorting coke, making out with guys AND girls, wearing raunchy lingerie on stage, and dropping F-bombs left and right.  If you prepare yourself for that, you can enjoy her performance (unlike the old man next to me as we exited the stage: "What a slut! Why would her agent let her do that role?" 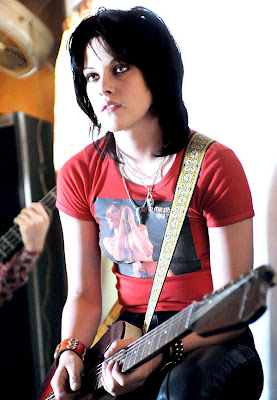 Kristen Stewart as Joan Jett.  Kristen infamously cut her hair into a 70s rock mullet for this role.  She's still paying the price, but I would say the hair cut paid off in the end.  Kristen embodied Joan so well  There was NO Bella Swan in this.  There wasn't even the girl from Into the Wild. This is like nothing Kristen has done before.  And I loved her performance.  I would say viewers would be a little more willing to accept Kstew cursing and screaming, kissing Dakota, doing all sorts of drugs, etc. because she is older and her prior films are a bit edgier.  I thought her performance was spot on. 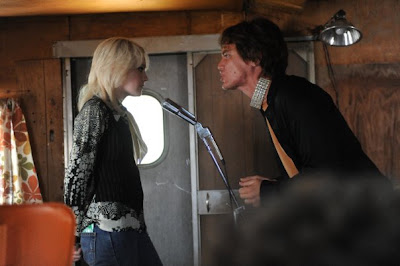 Michael Shannon as Kim Fowley.  Kim told me on twitter the other day that "Michael Shannon does a great job as me...but I do him better" which I thougth was a great statement, and if you see the film, very fitting.  This is a one-of-a-kind guy.  A record producer that isn't afraid to be a foul-mouthed sexist to promote his girl band.  And while it was quite disturbing, it was also kind of funny.  And Shannon was inspiring. 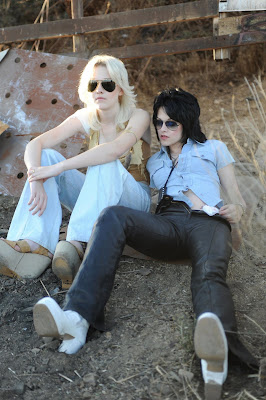 These three performances are worth the viewing, even if I didn't love the film.  On top of that, the film's got a killer rock & roll soundtrack, including songs performed by the actors (Stewart and Fanning) which are quite good.  Most importantly, you need to know what you are getting into.  Probably not something you'd take your 12 year old Twifan daughter to see. Just sayin'...
Posted by Linz McC at 5:16 PM

Great review! You've made me want to go see a movie I had no interest in before!