Book: A Long Way Down by Nick Hornby 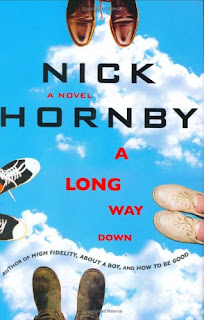 Emily gave me a handful of books for Christmas, including A Long Way Down by Nick Hornby. This is the second Hornby book I have read, and you can read my less-than-excited thoughts on High Fidelity here. I enjoyed A Long Way Down more than High Fidelity, and found it thoroughly entertaining, given the subject matter.

Each of four very different characters narrates their own chapters, and are all written in a first person POV with very different writing personalities.  The characters meet on New Year's Eve on the ledge of a building that is commonly used for suicide, all preparing to take their lives for one reason or another.  Some of them actually have pretty valid excuses for wanting to end it all, but for some it seems like their reasoning is immature.  Basically, this group of people manage NOT to kill themselves, and become a strange group of friends. Well, friends isn't really the right word because they don't seem to be able to stand each other.  But they have this one secret in common, so the lean on each other to get through.

I loved how Hornby wrote each person so differently. You've got a washed up TV personality amid a sex scandal whose family has abandoned him.  He is intelligent but irritated easily.  Next up, you have a woman who is dealing with a son that is basically a vegetable and she has never had the opportunity to have a real life.  She is very shy in her story-telling and she puts in **** instead of writing out when other characters swear.  And then you have the American 20-something that is depressed after his band fell apart.  I can tell the author had an American read his chapters to make sure he didn't say anything to English. And, last but not least (well, kind of least because she is ANNOYING), you have a teenage girl who is ready to jump off a building because a boy she likes won't tell her why he doesn't want to see her anymore (at least that is what we think in the beginning).  Her narration is extremely irritating but that is due to her personality being almost unbearable. :)

Given the fact that the whole story revolves around four suicidal people, Nich Hornby is great at finding humor in the situation.  I laughed out loud during my reading of the book and found the story to be refreshingly different from anything else I have read.
Posted by Linz McC at 11:59 AM

I'm glad you enjoyed it! It's been my favorite Hornby book so far.

His newest book, Juliet, Naked, is fantastic. Possibly my favourite of his!

Thanks for sharing the review of A Long Way Down by Nick Hornby. I found it interesting. will order my copy soon. Ihampers.co.uk

Have you read "About a Boy?" It's good but if you've seen the movie, you'll be surprised by the very different ending.